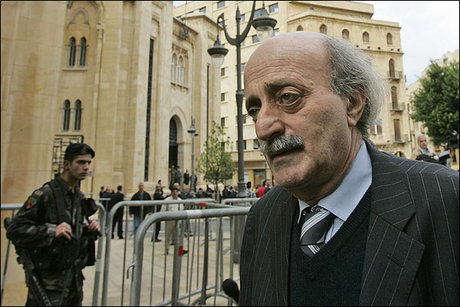 The newspaper said that Jumblat has tasked Health Minister Wael Abou Faour to hold contacts and meetings to assess whether the promotion of the three officers, including Commando Regiment chief Brig. Gen. Chamel Roukoz, is acceptable.

The FPM has conditioned the activation of the government's work to the approval of the promotion of around 12 officers from brigadier-general to the rank of major-general.

Such a move leaves Roukoz in the military for another year.

Roukoz is the son-in-law of Change and Reform bloc leader MP Michel Aoun, who wants him to become military commander.

The promotion of 12 officers is not likely to take place over the rejection of the army leadership, al-Mustaqbal Movement and the ministers representing former President Michel Suleiman in the cabinet.

But if the rival parties, mainly Aoun, agree on Jumblat's new initiative, then Moqbel would prepare a decree and refer it to the government for approval.

The FPM, which is now headed by Aoun's other son-in-law Foreign Minister Jebran Bassil, has been insisting on putting the appointment of high-ranking military and security officers on the top of the cabinet agenda.

Its ministers and their allies have previously walked out of a session to impose their demands.

General Aoun and Walid Jumblatt are the only 2 politicians working for the benefit of Lebanon at the moment.... the rest pfffft.

Dear Mr. Junblatt
I am flamethrower, a well respected and loved poster on naharnet with only one account. I have a grievance I want to bring to your kind attention. I was banned and humiliated and treated like a diseased leper by friends and and not friends. Since you always know what is happening, can you please tell me if my banning has something to do with regional players like Sa3oodi arabia?

Mr Jumb
Unfortunately, your lack of wisdom and proper judgement does not encourage others to take you seriously. Most people take you for a clown and a traitor. So far the only success that is attributed to you is your success in stirring sedition, sectarianism and disgust. I suggest therefore that you shut up for good and keep your silly advice for yourself.

Mr. Jumblat or aka Jombie, these days you're hopping like a Kangaroo from one issue to the other, trying to make yourself look as indispensable to Lebanon, when in fact you were declared brain-dead ages ago. Please go home, stay there and don't show your ugly face ever, You Stink.