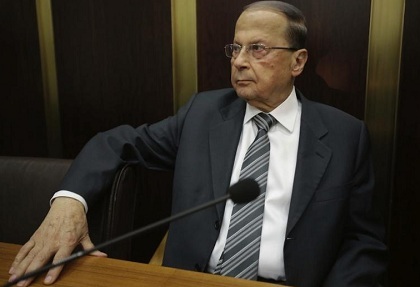 Change and Reform bloc leader MP Michel Aoun is expected to announce on Sunday an important stance from the controversial military and security appointments and his possible boycott of the national dialogue.

Aoun is set to give a speech during a ceremony that will be held on the occasion of handing over the Free Patriotic Movement leadership to his son-in-law Foreign Minister Jebran Bassil.

Sources close to Aoun told An Nahar daily on Saturday that the blatant extension of the terms of high-ranking army and security officials will prolong the country's political crisis.

The Change and Reform leader has rejected the extensions, calling for the appointment of new officials.

The issue has caused huge differences among cabinet members, leading to almost paralysis.

Aoun wants to strike a deal on the promotion of army brigadier generals to the rank of major general before Oct. 15 when the term of Commando Regiment chief Brig. Gen. Chamel Roukoz ends.

The promotion will keep Roukoz, his son-in-law, in the army and make him eligible to become military commander.

Aoun, a candidate, has also called for direct elections to resolve Lebanon's presidential deadlock which erupted in May last year when the term of Michel Suleiman ended.

The rival March 8 and 14 camps have failed to agree on a successor over their differences on a compromise candidate.

Aoun did not attend the second round of all-party talks that were chaired by Speaker Nabih Berri on Wednesday. He delegated Bassil instead.

“What would we do in a dialogue in which the other party rejects to discuss” ways to grant the people the right to choose their president? the sources asked.

MP Alain Aoun told al-Joumhouria newspaper that the Change and Reform bloc has not yet taken the final decision to boycott the national dialogue.

“It is still giving it a chance to reach a solution on the different issues that are under discussion,” he said.

hello lebajack
I like to introduce myself. I am a very close friend of flamethrower. I post, vote, and mass report on his behalf whenever he asks me to. If you have any questions regarding this matter, please contact flamethrower directly. Now, I have a very simple question for you: Do you know why my friend flamethrower was banned and treated like a diseased leper?

General Aoun and his family are the only people working in the interests of Lebanon. The rest pfffft.

Yes, could not agree more.
Only thing he should be allowed to say is 'I am sorry Lebanon for raping you, killing the last rights of the Christians & not being able to understand when I should shut up'.
Counting the days till he passes away.

when is this lunatic traitor going to shut up? He is so desperate he is running out of stupid ideas. Please someone tell him that

Very well said.
Lunatic. Mentally ill. Traitor. Corrupt. Liar. 3ameel.
Destroyer of Lebanon, of its economy and of the Christians.

Any Christian following a traitor is a traitor himself.

Aoun heads a Family business. Appointing His son-in-law as army commander has nothing to do with merit or seniority. There are tens of other equally or more qualified Christian officers who are deserving of the post. Aoun calls for reform, yet the very same things that he is demanding are anti reform, pro corruption, and pro anarchy.

There are tens of other equally qualified or more qualified candidates but they are not married to Aoun's daughter.

ex fpm
I agree. Nominating quality people to top positions should not be a family affair, nor should it be imposed

The Caporal told Sami Nader when he was married to Caporal's daughter:
"You are unable to FILL her"....
Wa7ad majnun w psychotic mareed living on high doses of neurasthenic drugs.

All this man brings to the paralysis crisis in Lebanon is more sticks to lodge into the wheel to insure that nothing moves. His solutions are idiotic to the point of being laughable, except that he is carrying out a very serious strategy of Hezbollah to maintain paralysis of the Lebanese State for the duration of Hezbollah's military adventures in Syria at the behest of Hezbollah's masters in Iran.

There can be no parliamentary elections without an election law. The Parliament cannot legislate when there is a vacuum in the Presidency, it sits ONLY as an electoral body until it elects a President. Your Giddo Aoun is blocking the election of a President since he cannot win election, by consensus or otherwise. So with his blocking action, no parliamentary elections, but government by a caretaker council of ministers and acting President Salaam. Extension is all you can do. To appoint a new head of the army requires a President's signature. There is no President because Aoun is boycotting the electoral session. Yes, idiotic indeed.

hello lebjack
I like to introduce myself . I am a very close friend of flamethrower. I post, vote, and mass report on his behalf whenever he asks me to. If you have any questions regarding this matter, please contact flamethrower directly. Now, I have a very simple question for you: Do you know why my friend flamethrower was banned and treated like a diseased leper?

I just met people from Ghazir who were blindly with the Caporal...now they do not want to hear his name...