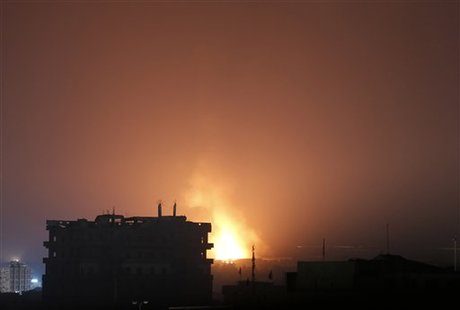 Saudi-led warplanes pounded rebel positions in Sanaa on Monday as the rebels called a mass rally to celebrate the first anniversary of their seizure of the Yemeni capital.

Despite six months of coalition air strikes in support of exiled President Abedrabbo Mansour Hadi, expanded into a ground operation in late July, the rebels still control much of the north and center of the country.

They overran the capital unopposed one year ago with the support of renegade troop still loyal to Hadi's ousted predecessor Ali Abullah Saleh.

One raid targeted the home of a leading lawmaker from Saleh's General People's Congress party, Ahmed al-Kahlani, the witnesses said.

Others targeted arms depots in the east of the capital controlled by pro-Saleh army units.

Saleh is himself a Shiite but the Huthis' alliance with the ousted strongman was widely seen as marriage of convenience as they had led repeated rebellions against his rule before his overthrow after a bloody Arab Spring-inspired uprising in 2011.

The rebels called on their supporters to turn out in numbers to mark the anniversary of their seizure of Sanaa and "prove to the world that the people stands by the leadership of the revolution."

The rebels have lost five southern provinces to forces loyal to the exiled president since July and are battling an offensive in Marib province east of the capital.

But as Prime Minister Khaled Bahah returned from exile to the main southern city of Aden last week, he acknowledged that his government still faces challenges, even in the south.

"The future challenge is how to prepare ourselves to defend this city and neighboring provinces," he said.

Saudis are so hurt that they lost the great city of Sanaa, and they have big trouble taking it back.

does it hurt you to finally admit it is a martyred iranian jihadi terrorist family in your avatar?