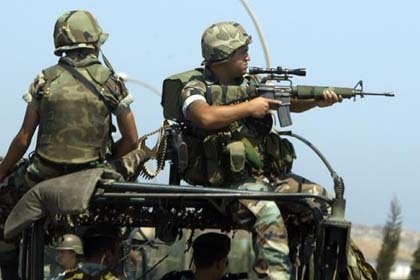 Change and Reform bloc officials revealed Tuesday that consultations among top politicians aimed at ending the deadlock on the promotion of army officers have made progress.

The officials, who were not identified, told al-Mustaqbal newspaper that the talks are tackling the promotions and the activation of the work of parliament and the government.

Ministers representing Change and Reform bloc leader MP Michel Aoun have been boycotting cabinet sessions over their insistence to agree on a working mechanism for the government in the absence of a president and the promotion of army officers.

Their boycott has paralyzed the cabinet, adding to the country's woes, which started with the vacuum at Baabda Palace following the end of President Michel Suleiman's six-year tenure in May 2014.

Parliament has also been paralyzed. The last time it met was when MPs extended their own term in November.

Change and Reform totally rejects the extension of the terms of top military and security officials, calling for the appointment of new figures instead.

It is also backing the promotion of army officers to keep Commando Regiment chief Chamel Roukoz in the military and make him eligible to become army commander because differences among rival parties are hindering new appointments in the absence of a president.

Roukoz is the son-in-law of Change and Reform bloc chief MP Michel Aoun.

Sources said that Aoun's attendance of the national dialogue chaired by Speaker Nabih Berri on Tuesday will be a sign that a deal on the promotions is in the making.

If the lawmaker continues to boycott the all-party talks and delegates his other son-in-law Free Patriotic Movement chief Foreign Minister Jebran Bassil instead, then it would be clear that his objectives have not yet been met.

General Aoun and Walid Jumblatt are the only two honest politicians working for Lebanon's family interests.... the rest pfffft

Hello
I like to introduce myself. I am another form of mowaten. I post, vote, and mass report whenever i feel like it. If you have any questions or concerns please contact mowaten directly.

Wrong : Roukuz is not corrupt and Shreek is no longer my friend.
Right : the caporal is really a mareedman and a neurasthenic.

I now blame the army for not toppling this rotten civilian administration and putting everyone of them crooked politicians under house arrest, Aoun and Nasrallah being first among them. Enough of this monkey business, enough of this circus, let the army take over, impose military rule for at least 5 years and let's clean the slate fully, right now we are only making things worse. The Lebanese do not understand democracy, for them it is only a ploy to wring out huge financial profits fro this system, let the soldiers rule, only the army boot is good for us, just like the Syrian boot, we deserve no better and this is the truth anyway.