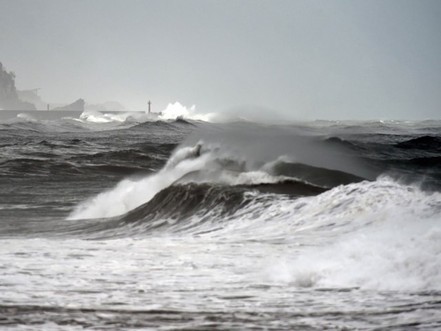 Thousands of tourists were evacuated from islands off Taiwan Sunday as super typhoon Dujuan gathered strength on its approach to the island.

Taiwan's weather bureau upgraded Dujuan to a "strong typhoon" -- it's top category -- on Sunday evening as the storm approached the island's east.

Other regional weather bureaus, including the Hong Kong Observatory, categorized it as a "super typhoon" as it intensified to reach gusts of 227 kilometers (141 miles) per hour.

Almost 3,000 people, most of them tourists, were evacuated from Taiwan's Green Island and Orchid Island -- popular with visitors -- with heavy rains and high tides forecast.

The typhoon is due to make landfall in eastern Taiwan on Monday night.

"It is not likely to weaken in any significant way before making landfall," a spokesman for the weather bureau told AFP.

More than 24,000 troops are on standby for disaster relief and evacuations from areas prone to landslides and flooding.

Emergency response centers have been set up in the north and east, where heavy rain is expected, as well as 100 shelters.

The storm threatens long-weekend plans for many as Taiwan celebrates the Mid-Autumn Festival, also known as Moon Festival, when families typically gather and moon-gaze.

Dujuan is set to hit the Japanese island of Ishigaki at around midday on Monday.

The storm is on course to hit mainland China from Tuesday after moving through Taiwan.

Japan's meteorological agency has warned it could trigger waves 13 meters (42 feet) high when it strikes the country.

So far there have been no reports of damage or injuries in connection with the typhoon, but "winds are getting stronger now", an Ishigaki official told AFP by phone.

It went on to kill 21 people in China.