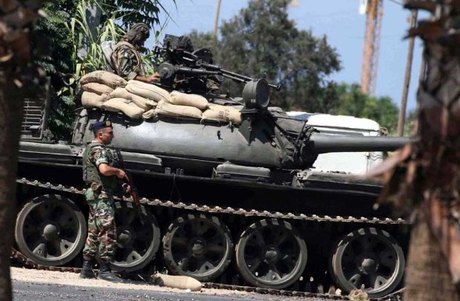 Al-Mustaqbal Movement has reportedly approved a proposal for the government to approve military promotions, a step forward to resolve the cabinet crisis over the issue which is a key demand of Change and Reform bloc chief MP Michel Aoun.

As Safir daily said Tuesday that al-Mustaqbal added a condition on the promotions, calling for the appointment of a new director-general and a new command council for the Internal Security Forces.

MP Salim Salhab did not confirm to Voice of Lebanon radio (93.3) that al-Mustaqbal approved the appointments, only saying that Prime Minister Tammam Salam's call for a cabinet session would be a sign that a deal has been struck among the rival leaders.

But the army leadership will be inquired on the issue, which will likely include the appointment of five new members for the military council, including those whose terms have been extended, meaning Army Commander Gen. Jean Qahwaji and Chief of Staff Maj. Gen. Walid Salman.

The proposal also includes the promotion of three officers – a Maronite, a Sunni and a Shiite - from the rank of brigadier-general to major-general.

The post of Commando Regiment chief Brig. Gen. Chamel Roukoz, who is Aoun's son-in-law, would be decided by Qahwaji after he gets promoted to the rank of major-general, said As Safir.

The approval of the appointments and promotions are key for Salam to call for a cabinet session.

Ministerial sources told al-Joumouria newspaper that the cabinet could convene on Friday following Salam's return from New York where he is attending the General Assembly session.

But according to As Safir, the Kataeb Party and the ministers representing former President Michel Suleiman have not yet given their green light to the promotions.

Change and Reform now means politicizing the military institutions and making it impossible for an officer to reach army command unless he/she belongs to a political party, preferably aoun's party.

Marcus you never posted anything against the illegal extensions of the terms of those close to the March 14 haeriri group. You have a problem when it is a legal decision supported by all?

Bullshit country because of the Family Protected Mazra3a...

Officers in the Army arevvery angry and say that if they want to get a promotion they better join a Party or marry the daughter of the head of the Party...

How the caporal is destroying our Army:

To humble,
You forgot another condition. The party or the head should be covering the illegal actions of a military group.

No matter what the Almustaqbal excuse is (Russia intervention or lack of support from Saudi arabia) this promotion excludes other officers deserving it ahead of Roukoz. This is called purely and simply cowardness by letting jungle rules prevail "la raison du plus fort est Toujours la meilleure"

Two sons in law down one son in law to go?... or is Roy just chump change? Has he resigned from the chairmanship of the OTV and it's meager income or not yet? Watching Gebran became a multimillionaire overnight has not heen easy for him or daughter number two.