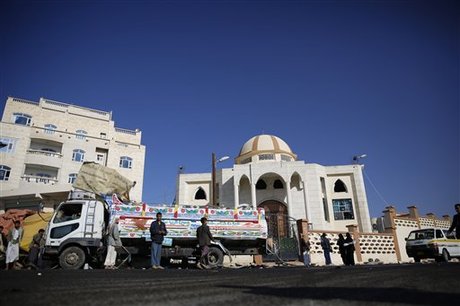 There was no immediate claim of responsibility but similar attacks have been carried out in the past by the Sunni extremist group Islamic State, which has targeted Shiite Huthi rebels who control Sanaa.

A man wearing an explosives belt blew himself up on Tuesday evening among a group of Huthi rebels guarding Al-Nour mosque, where both Sunnis and Shiites pray in the northwest of the capital, witnesses said.

IS claimed responsibility for a similar bombing in Sanaa on September 24 that killed 25 people.

The Iran-backed Huthi rebels have held the capital for more than a year, after sweeping south from their northern highlands.

They entered the main southern city of Aden in mid-March before being pushed out four months later by loyalist fighters backed by a Saudi-led Arab coalition.

Highlighting the still-fragile security situation in Aden, IS claimed a series of suicide attacks Tuesday that targeted the temporary government headquarters and Arab Sunni coalition troops in the port city.