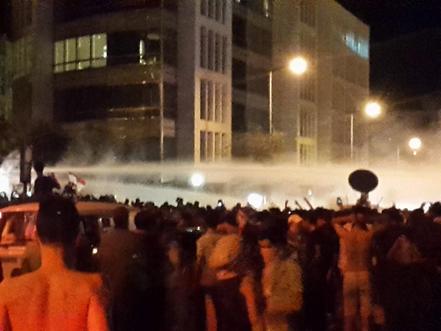 Several protesters were arrested and many others were injured Thursday as security forces fired tear gas and water cannon to disperse civil society demonstrators who tried to enter into central Beirut's al-Nejmeh Square where the parliament is located.

The Red Cross announced transferring 35 people to hospitals after they suffered suffocation injuries due to tear gas inhalation.

Meanwhile, the Internal Security Forces said several of its members were injured after protesters “hurled rocks and solid objects” at them.

It later said one of its officers was critically injured in the confrontations.

Protest organizers meanwhile stressed that demonstrators will not leave the street before the release of all detainees, as the You Stink campaign demanded "an emergency cabinet session to resolve the garbage crisis" and held Interior Minister Nouhad al-Mashnouq responsible for the "security escalation."

Demonstrators had started gathering at Martyrs Square at 6:00 pm for a central march aimed at reaching the adjacent al-Nejmeh Square.

A statement recited by another protest organizer at the demo demanded “the sacking of the environment minister.”

“Remove the garbage that has been accumulating outside our homes,” the statement added, referring to the unprecedented garbage crisis that erupted after the July 17 closure of the Naameh landfill.

“They continued their procrastination until the arrival of rain,” the statement said.

It also voiced its support for residents who live near the suggested sites for the establishment of new garbage landfills and expressed its solidarity with the Campaign for the Closure of the Naameh landfill.

The protest movement also demanded “immediate parliamentary elections that guarantee the proper representation of the Lebanese people without any discrimination.”

After he announced his plan earlier this month, the civil society and local residents of Akkar, Naameh, Majdal Anjar, and Bourj Hammoud protested against the step, citing perceived environmental and health hazards.

Did this occur in Israel?

bes chatrin to pretend to defend Lebanon while every lebanese suffer from pollution and lack of proper jobs?

Hezbollah is busy in Syria and preparing for a "surprise" attack from Israel which will create a second front for Hezbollah when the USA and it's allies mount a counterattack on Syrian allies within a month. You think Lebanon has problems now? Have fun now kids this is going to be a hard winter

Please change this avtar name and respect the rest of us.

To peace,
"With their weapons they could coerce the get to recycle, stop corruption etc..."
I guess I know what you mean that they are the in the origin of all crisis.
However even in good will I don't like to see HA using their weapons against the gvt.
I don't like the armed militia of HA, but I am sure that themselves don't have interest in using their weapons in that context.
However YES YESSS, HA can help solving everything by putting their military potential under the Lebanese army command and being only a political party. THEN everything will run smoothly in the right way.

God bless the Lebanese people in the streets. Right now the only pulse for the Lebanese state is in their hand.

MPs /Ministers/ Deputies/ gov, don't care as every end of z month they will get their paycheck. Their businesses are abroad and so their families, ect.

Go and be useful---by going to ministers/ MP's homes instead and requesting your demands.

see this is typical : every time there is an article on hezbollah or syria , their sheep post and comment and defend... but each time an article deals with lebanese daily problems, no comment and they never show up...

it tells a lot on how much hezbis care about lebanese....