Msallem: Freedom of Expression Must be Practiced Under the Law 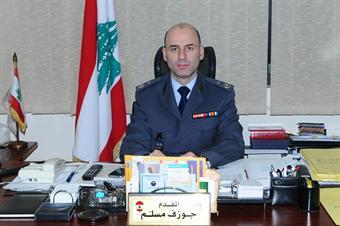 Head of the Public Relations division of the Internal Security Forces (ISF) Lt. Col. Joseph Msallam said on Saturday that freedom of expression is a righteous demand only if it is practiced under the law.

“We believe in freedom of expression which is a constitutional right, but it should be expressed under the law, which means the protests should not be violent” said Msallam in a press conference he held against the backdrop of Thursday's downtown demonstrations that turned violent and stretchered till a late hour.

“Demonstrations must first be approved and announced to the related authorities otherwise they are considered illegal,” he stated, pointing out that none of the protests that were held so far have complied to that demand.

“Organizers of demonstrations must shoulder responsibility for any damages caused by the campaigners they should not disclaim the responsibility,” he said, adding “we support righteous demands that respect the law.”

On accusations fired at the ISF members calling them names for carrying out their duties Msallem said: “By law, protesters have no right to curse or hurt security members or civilians. They have no right to damage public or private property. Activists who were detained are not prisoners of opinion. They have damaged public property and assaulted the security forces.

“The duty of the ISF is to protect democracy, the government premises and public properties. Coordination between the ISF and the organizers of the demonstrations is crucial,” he stated.

Asked about the reason that compels security members to block certain areas and use water cannons against demonstrators, Msallem said “We prevented protesters from entering Nejmeh square, which is a public property for all the Lebanese, for security reasons.

“Water cannons are used in many developed countries,” he said, adding that the demonstrations have done much worse "they have hurled Molotov bombs at security members," he said showing video footage.

He concluded saying: "Organizers of the civil society should have admitted the mistakes they made when they removed the cement barriers and barbed wires,” instead of disclaiming responsibility.

it's funny how they preach about this law, yet the demonstrations are happening because people in government aren't following the laws.
double standards don't apply!

Mr Musallem you are right. You did a good job separating the protestors striving to get righteous demands and the thugs benefiting from the chaos to wreak havoc on an otherwise justified protest.