Suleiman: My Conscience is Clear over Failure of Security Appointments Settlement 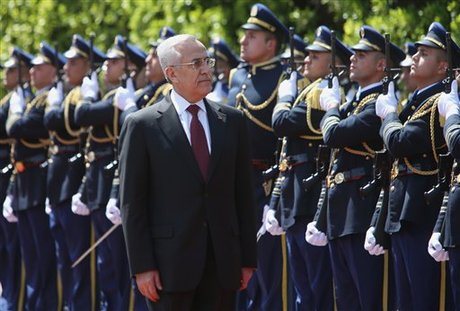 Former President Michel Suleiman noted that the failed settlement over the security appointments would have “violated the rights of Christians,” reported the daily al-Mustaqbal on Sunday.

He therefore expressed his satisfaction with its failure, adding: “My conscience is clear.”

Blame had been directed towards Suleiman's Consultative Gathering and the Kataeb Party over the failure of the proposal.

“The soldier sacrifices himself for the military institution and we have showed our loyalty to the army through our rejection of the suggestion,” said Suleiman, who is a former army commander.

Furthermore, he remarked that the privileges of the president would have also been harmed had the proposal been adopted.

“The security promotions are the responsibility of the head of state, who signs the decrees and refers them to the concerned minister,” he explained.

“The failed plan suggested that this responsibility be handed to the cabinet” that would politicize the issue, Suleiman added.

“We therefore protected the military against political meddling and averted political interests from interfering in security promotions,” he continued.

“This is a major achievement,” stressed the former president.

Sources close to Free Patriotic Movement MP Michel Aoun have blamed the ministerial bloc loyal to Suleiman for the deadlock on military promotions.

Aoun had been hoping that the promotion of Roukoz, his son-in-law, would keep him in the military and make him eligible to lead the institution.

Your decision was correct general, you wanted to protect the sacred institution that is the lebanese army aoun wanted a special law that would make his second son in law jump the queue. Remember how after aoun himself declared that election losers should not be ministers for months he obstructed and stalled the formation of three cabinets until son in law number one a twice election l00serr was appointed. And how after realizing that son in law number one could never be elected FPM president he intervened and interfered after he'd promised not to.

Sleiman the bane of aoun's existence, an army commander who actually won a war unlike aoun who started and lost two, a baabda resident by right rather that a squatter like aoun, a real president eather than a self styled one like aoun, a man who stayed at his command post in baadba until the last second rathen that ran away in secounds like aoun, and was pisses aoun the most is that sleiman will always be known as mr president general michel.. aoun will always be the deserter, who as it happens he and his sheeple are just now like fools celebrating his cowardly desertion.

Absolutely NOT. Sleiman has achieved the BAABDA DECLARATION and this why he is hated by Ebola and the Caporal (who SIGNED it).

Humble, the hell with Hezb Ebola and the Caporal, they have nothing on Suleiman, the dust from his shoes is worth them all. They hate him because this man stood up to them, unlike Aoun who has always stooped so low just to kiss the arse of Syria, Iran and Hezbulshaytan. Let them all zip it up, they are all covered in sh*t, Suleiman is way above them all.

I have always liked this man. He has been a true patriot. I salute you Mr. President General.

Ebola followers will never answer your excellent comments...
You stated the reality

Very good action. You always do!!!

Great story. Gives us hope. Thank you for telling it.

I notice that these sick people are still behaving sickly on this forum. Are the mods still that sick?