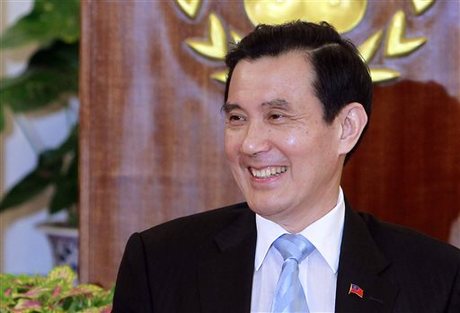 Taiwan's president Thursday defended a historic summit with China as the first step to normalizing relations between the leaders, as opponents wary over a rapprochement after decades of hostility accused him of selling out the island.

Ma Ying-jeou will meet with his Chinese counterpart Xi Jinping in Singapore on Saturday, in a dramatic recognition of a seven-year period of warming relations which has raised fears self-ruled Taiwan's security may be at stake.

It will be the first time leaders from the two sides, separated by the narrow Taiwan Strait, will have met since their split at the end of a civil war on the mainland in 1949, which left Taiwan to forge its own identity as a democracy.

In an address to the nation, Ma hailed the meeting as "for the welfare of the next generation".

"Both sides of the Strait should work towards lowering hostility, broadening communication and deepening interaction. This is the first step towards normalization of meetings between the leaders," he said.

But the summit has been slammed by opponents who say he is trying to influence presidential elections in January, which the ruling Beijing-friendly Kuomintang (KMT) is set to lose.

Both Ma and his party have seen support plummet partly due to anti-China sentiment in Taiwan, as concerns grow over Beijing's influence.

"We're angry that Ma is going to sell out Taiwan," said Hsu Ya-chi, spokeswoman for the pro-independence Taiwan Solidarity Union, one of the opposition parties that suspect some sort of secret deal between Ma and Xi.

"Ma has no right to represent Taiwan," Hsu added.

Although nominally rivals, the two sides have become tightly linked, with the launch of direct flights, trade deals and a tourism boom in recent years as they forged previously unthinkable ties.

But despite the many decades of operating as a self-ruling economy with a fierce sense of identity, Beijing considers the island a renegade province awaiting reunification -- by force if necessary.

"The summit is not for the next election, it is for the welfare of the next generation," said Ma.

"I feel it is my duty to build a bridge for the two sides, so whoever is the next president can use it to cross the river."

Ma said key ally the United States had been notified of the meeting in advance, but had played no role in arranging it.

The U.S., which is committed to defending the island -- its former cold war outpost -- against any Chinese aggression, has given a cautious welcome to the summit which will see the leaders speak publicly and behind closed doors before having dinner.

While observers agree the meeting is a landmark moment, there are questions over why Beijing has agreed to do it now now, having resisted Ma's previous attempts to organize a face-to-face.

As well as being a public show of support for the KMT ahead of the elections, it is seen by some as a move towards solidarity with a U.S. ally at a time of simmering tension between Beijing and Washington.

Ma came to power in 2008 promising prosperity through better ties with Beijing, an approach that reaped economic dividends.

But many voters feel the trade deals have benefited big business, not ordinary people, and observers say the KMT risks a backlash over the summit at the presidential elections.

"The people will not allow him (Ma) to limit Taiwan's future purely for his own political credit," she said.

Ma confirmed there would be no agreement or joint statement between the two sides, a move analysts say is designed to assuage the nerves of the Taiwanese public.

The leaders will give individual press conferences after the meeting.

To avoid the risk of a protocol problem over the title "president", they will not use their official titles, instead addressing each other as "Mister".