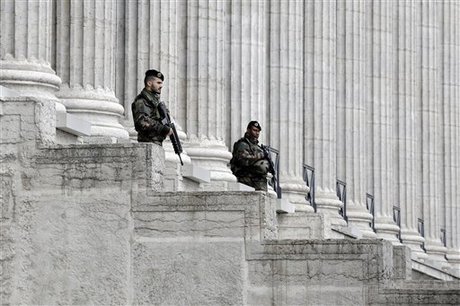 Nearly 1,000 people thought to pose security risks have been denied entry into France since stepped-up border controls were imposed ahead of the COP21 climate talks on November 13, just hours before the Paris attacks, the interior minister said Saturday.

They were prevented from entering France "because of the risk these people could represent for public order and security in our country," Bernard Cazeneuve said during a visit to the northeastern city of Strasbourg.

He said nearly 15,000 police, gendarmes and customs agents have been deployed to the borders.

The aim of the boosted controls is to enable the authorities to reinforce security as the COP21 climate talks officially get under way in Paris on Monday and also to confront the high terrorist threat level facing the country, Cazeneuve said, adding that they would make any necessary arrests.

A few hours after the tougher border controls ahead of the climate talks took effect on November 13, extremists carried a series of attacks at several sites in Paris, killing 130 people.

The French government, which has declared a state of emergency, said it would continue the increased border security as long as the terrorist threat remains high.