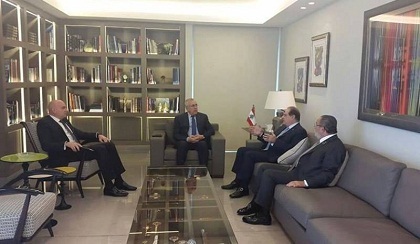 Labor Minister Sejaan Qazzi announced Monday that former president Amin Gemayel is still the presidential candidate of the Kataeb Party, noting that negotiations with other political parties must start from this point.

As for the nomination of Marada Movement leader MP Suleiman Franjieh, Qazzi acknowledged that Franjieh is one of “the top four (Maronite) leaders who had met in Bkirki.”

“We are not making personal or partisan demands and we are not voicing conditions, but it is the duty of every presidential candidate, be him Suleiman Franjieh or any other March 8 or March 14 candidate, to declare his choices, stances and beliefs to the Lebanese public opinion,” Qazzi added.

Any nominee must make his stances known on the issues of “the Baabda Declaration, neutrality of Lebanon, Hizbullah's illegal arms, the ongoing war in Syria, border violations, the Blue Line, elderly rights and other issues that are important to us,” the minister stressed.

“We will decide accordingly and the Kataeb Party's stance is independent and cannot be influenced by any instructions or pressures,” he said.

His remarks came amid a flurry of political talks in the country between parties from both the March 14 and March 8 camps.

The new momentum followed a meeting that was held in Paris between Franjieh and al-Mustaqbal movement leader ex-PM Saad Hariri.

The Franjieh-Hariri meeting has sparked intense speculation that they agreed to the nomination of the Marada chief as president.