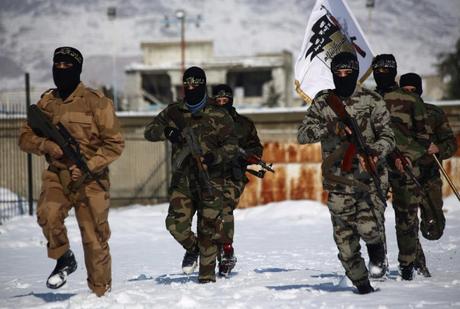 The powerful Jaish al-Islam rebel group announced late Monday it will attend a major meeting of Syrian opposition forces in Riyadh this week, the first rebel group to confirm participation.

In an emailed statement, Jaish al-Islam (Army of Islam) spokesman Islam Alloush said it would send two delegates, Mohammad Alloush and Mohammad Birqdar, to the conference, which is set to begin on Wednesday.

Zahran Alloush, Jaish al-Islam's commander, would not attend the meeting, according to the statement.

The rebel group is the most prominent armed opposition faction near Damascus and controls most of the Eastern Ghouta suburb, which is regularly bombarded by government forces.

It is said to have close ties with Saudi Arabia, which announced last month it would host a conference to bring together both armed and political factions in Syria's opposition to hash out a common platform ahead of potential negotiations with the regime.

A source in the opposition told AFP last week that the Southern Front, an alliance of non-Islamist groups in southern Syria, was also invited, but the group has not confirmed whether it will attend the conference.

The invitees do not include armed groups considered to be "terrorist", such as the Islamic State group and Al-Qaida's Syrian affiliate Al-Nusra Front.

There have been reports that Ahrar al-Sham, perhaps the most powerful group after Al-Nusra and IS, will be among the invitees.

Ahrar al-Sham has declined requests for comment on the issue.

Kurdish factions and the Syrian Democratic Forces, a recently-formed coalition of Kurdish, Arab, and Christian militia, were not invited.