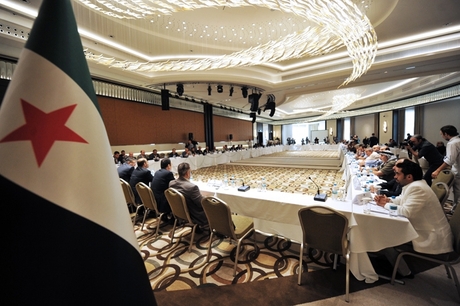 Syria's main opposition groups agreed at unprecedented talks Thursday to negotiate with President Bashar Assad's regime but insisted he step down at the start of any political transition.

Gathered in the Saudi capital for the first major talks among various political and armed factions, representatives agreed on a framework for negotiations sought by world powers.

"The participants are ready to negotiate with representatives of the Syrian regime... within a specific timeframe that would be agreed on with the United Nations," participants said in a statement.

But the opposition groups insisted that "Bashar Assad and his aides quit power with the start of the transition period" set out by world powers in Vienna last month.

The United States swiftly welcomed the Riyadh accord.

"We welcome the positive outcome... including reaching a consensus on principles for a pluralistic and democratic Syria and on how to advance a political settlement," said U.S. Secretary of State John Kerry.

"We appreciate Saudi Arabia’s leadership in convening this broad and representative group... who agreed today on the structure of their negotiating body to represent them," he said.

"While this important step forward brings us closer to starting negotiations between the Syrian parties, we recognize the difficult work ahead, and remain determined to continue toward a political settlement that brings an end the conflict."

However, one of Syria's most important rebel groups, the Ahrar al-Sham force, said it had walked out of the meeting.

But sources inside the talks and Western diplomats said it subsequently signed on to the agreement, though this could not immediately be confirmed.

In the biggest diplomatic push yet to resolve Syria's nearly five-year civil war, top diplomats from 17 countries -- including backers and opponents of Assad -- agreed in Vienna on a roadmap for the country.

It would see a transitional government set up within six months and elections held within 18 months, and calls for negotiations between the opposition and Assad's regime by January 1.

Under Thursday's deal, opposition groups have formed a "supreme committee for negotiations" based in Riyadh that will act as a reference for their negotiating team, whose members the body will choose.

According to opposition sources, the committee will be made up of 30 members, a third of them representing armed factions.

The opposition groups called on the United Nations and international community to force the regime to take "goodwill measures" before negotiations can begin. That would include an end to indiscriminate bombing and sieges on rebel-held areas, the entry of humanitarian aid, the release of political detainees and a halt to executions.

Suhair Atassi, a member of the National Coalition, the main political opposition grouping, told AFP the agreement represented "a unified vision for the settlement process."

The future of Assad was a key issue of the talks.

Western- and Arab-backed rebel groups have insisted the Syrian leader must step down immediately. Internal opposition groups disagree, as do Assad's key backers, Tehran and Moscow.

Participants appeared to have reached a compromise by agreeing to hold talks without Assad's immediate departure but insisting he step down later.

The opposition has been under intense pressure to sign up to the peace process.

Not all of the armed factions attended the talks, with the Islamic State group and the al-Qaida affiliated al-Nusra Front excluded.

Kurdish fighters were also left out.

Given its longstanding opposition to Assad, Saudi Arabia's hosting of the talks came under fire, with Tehran saying the meeting was in breach of declarations made in the international peace talks.

"Terrorist groups pretending to be moderate opponents (of the regime) and seeking to determine the future of Syria and the region will not be permitted," Abdollahian said in remarks quoted by state television.

"Only the people of Syria can decide the future of their country," he added.

Riyadh has been among those calling most strongly for Assad's departure, and Saudi Foreign Minister Adel al-Jubeir insisted again Thursday that he must leave.

Assad "has two choices: leave through negotiations, which would be fastest and easiest, or he will be removed by force, because the Syrian people refuse for this man to be allowed to stay in power," Jubeir said.

The United States will hold further discussions on Syria with Russia and the United Nations in Geneva on Friday.

Since it began in March 2011, Syria's conflict has left more than 250,000 dead and forced millions from their homes.

Faylak bader, abou fadel el abbas, iranian islamic revolution gards, hezbollah...all those are pro peace and love coming straight from may 68....
Texas no need to argue anymore, once they go into the retoric of wahabit/zionist/extremist and forget who they do really support well.... How can u argue? Today a brave 17yo boy fighting in fatima brigade (also a secular iranian brigade brought all the was from afganistan ) was
Killed in syria and burried in teheran in official burring, indeed all secular and modern those iranians not at all to be compared to the wahabit...
By the way southern what is the legal age to mary young girls in iran there was a debate 2 monthes ago, so 9? 11?...
All a bunch of retards...

Shame on what southern? :)
What i am "prentending" is that u seem to know a lot about wahabis and democarcy and fanatism, but when it comes to iran suddenly u don't
What i meant is both regimes are retard and iran has its own fanatics batteling in syria, even bringing young boys frim afghanistan and not hidding it (official funeral)
Selective memory southern?? Too much al manar?
So to be clear: i meant that all of them are retarded and u coming lecturing us about secularism democracy, non violance while supporting iran and its mercenary is just hypocrit
Was i clear? Or u need more details?

U see southern again now u do support terorist like if we like isis and the calif...
Well southern we are against the dictator..
And by the way utube is full of videos of the iranian peacefull millicias killing and burning people.. But here also hard to be seen on almanar..
Again all bunch of retards southern.. Not getting any better...

Big john when i say all retard what does it mean to u?..
Not only selective memory but selective readding???
And for a resistant like u well gess what go see the familly of ur ssnp comrade slaughtered by syrian regime (assad father so same regime) and ask them why they childreen died? They were sectarian terorist also?
Thank u for opportunistic...
And finaly leftist media u mean the all conspiracy media (voltairenet style?) or the pro comrad Tzar putin?

Trick u are really a retard living in 12th century catholic church spirit....

Can u tell us big john of what is that kurdish coalition made off?
Well i'm gonna tell u kurdish forces mainly YPG christian and arab millicias, all against assad...
U know like in lebanese partriotic restistance front (not the current islamic one) they were all against israely enemy and that sadely didnot prevent them to fight eachother....
U see....

Well to be frank tex all country messed with us during civil war, even kazafi use to send arms...
But tge dirrect iminant threat is the armed (in a military way, organised and dirrectly linked to iran) our local iranian millicia and of course the assad regime..
But of course assad involvement in hariri hawi kassir.. Death is a conspiracy theory, smaha was also a conspiracy theory, but abou addass was not??...
Enno that's the kind of logic i was talking about...

Selective memory tex...
And the worse not only assad bombarded east beirut but hezbollah batteling amal in aklim al toufah for more than 2 years, assad being responsible for assassination of leftist even for syrian social nationalists that also they tent to forget...
Them allying with hashem minkara in tripoli to put a front against wahabi hariri and 14 march that is more logic...
:)

Conspiracy man...
It is impossible, assad would never do that while;
Israel to put strife in lebanon decided to assassinate hariri kassir hawi gemayel..and most of assad regime opponents in lebanon
Hezbollah killing officer samer hana by mistake
Hezbollah fixing boutros harb elevator
Smaha being tricked (and next time they will say forced) so well thath he brought bombs frim syria and all the tapes are wortheless
Eid's chauffeur and armed man blowing 2 mosqs in tripoli without him having a clue...
And there is so more
These are the truth, the total truth and anyone sayingelsewhise is a wahabi/zionist/takfiri...
Retards man, retards...
:)

I dare imagine to make his own list of the people list that are fight this was, can you please by looking on Wikipedia tell me the percentage of the groups that are not Wahabites ?