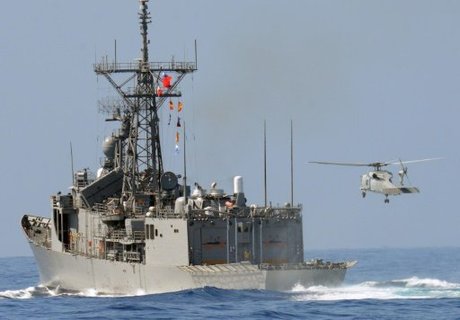 China has summoned the U.S. envoy to protest Washington's sale of warships to Taiwan, as part of a massive $1.8 billion arms package, Beijing said Thursday.

Taipei will get an array of missiles, amphibious assault vehicles and two frigates in the latest deal, which comes as the United States looks to shore up its Asian friends and allies in the face of growing Chinese assertiveness.

"China staunchly opposes America's sale of arms to Taiwan," a statement from the country's foreign affairs ministry said, as U.S. charge d'affaires Kaye Lee was called in for a dressing down.

It said Beijing would impose sanctions on any companies involved in the sale, and warned Washington to cancel the deal to "avoid causing further damage to Sino-U.S. relations".

Although it has been governed separately since the end of a civil war in 1949, China considers Taiwan a renegade province awaiting reunification.

It regularly lashes out at Washington and other powers for their dealings with Taipei, which it labels "interference" in Chinese domestic affairs.

The U.S. weapons sale -- the first to Taiwan in four years -- comes at an increasingly febrile time in East Asia, where China's aggressive position on territorial disputes with its neighbors has raised anxiety levels in the U.S. and among allies from Japan to the Philippines.

Beijing is building islands with military-grade airstrips in the South China Sea, part of what observers say is an attempt to assert control over almost the whole of the body of water.

Several countries -- along with Taiwan -- also claim parts of the sea.

The U.S. and its allies have carried out high-profile overflights of the sea, nearing the artificial islands, in what they say are routine "freedom of navigation" exercises in international waters.

Beijing says they are provocations and infringements of Chinese sovereignty.

"U.S. companies' involvement in arms sales with Taiwan constitutes a severe infringement of China’s sovereignty and security interests", foreign ministry spokesman Hong Lei said during a regular press briefing, adding that "the Chinese government and companies will not conduct cooperation of business with those kinds of companies."

Washington, which is bound by domestic laws to supply defense materials to Taiwan, played down the impact of the agreement.

State Department spokesman John Kirby said the deal was in keeping with long-held American policy and would not affect relations with Beijing.

"As for our relationship with China, that remains an important relationship that we're going to continue to work at," he said.

"There's no other message that needs to be taken away from this, other than we take seriously our commitment to the defense needs of Taiwan."

China's leader Xi Jinping and Ma met for a historic summit in November, the first leaders' summit since the 1949 split.

That meeting, and the generally pro-Beijing posture of Ma's administration, has caused disquiet in Taiwan, where many people fear the growing reach of the world's second largest economy.

Taipei said the deal was a testament to its right to self-defense.

"The U.S. pays heed to Taiwan's need to defend itself and would like to help Taiwan maintain sufficient self-defense capabilities," the island's defense ministry statement said in a statement.

Observers said the Chinese reaction was predictable bluster from Beijing.

The deal is unlikely to have a significant impact on Sino-U.S. relations, said Bonnie Glaser, a senior adviser for Asia at the Washington-based Center for Strategic and International Studies.

"China threatened to impose sanctions on U.S. defense companies who were responsible for the sale the last time the U.S. announced an arms sale to Taiwan, but they didn't follow through", she said.

She added that Beijing will likely stop short of taking steps this time for fear that Washington might retaliate with its own sanctions.