Al-Rahi: Distinction Must Be Made between Accepting Presidential Initiative and Proposed Candidate 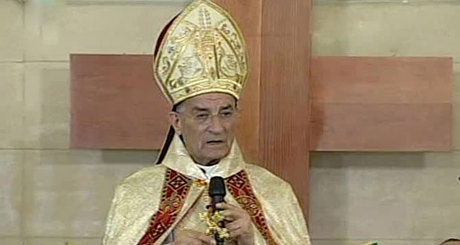 Maronite Patriarch Beshara al-Rahi justified on Sunday his recent remarks that the political initiative aimed at ending the deadlock in Lebanon should be taken seriously.

He said during his Sunday sermon: “Our saying that the initiative should be taken seriously means that we are distinguishing between it and the name being proposed.”

The suggestion was met with reservations from the March 8 and 14 camps.

Al-Rahi's remarks on Thursday that the initiative “should be taken seriously” was met with criticism, most notably from the Change and Reform bloc.

When Caporal says :"Me, or no one", this is not an election but a dictatorial nomination.
The good news is that he will never ever become president because he is a born loser.

The initiative should be taken seriously and is a welcome break in the deadlock! However, the agreement lies among Maronite leaders agreeing! Humble... Its not your corporal that is against this initiative but also Dr Geagea and the Kataeb! So chill with your blame game.

Kataeb and LF said that if the Caporal refuses to come then the meeting would be useless because the problem is the caporal.

Humble... The LF (Dr Geagea) are the biggest objectors to Suliman Franjieh becoming president! The Kateab is also against his presidency but not as much. The FPM (Aoun) is not against or for his presidency and have concerns as to why and how he was so quickly supported by the Mustaqbul movement without consultation, given he is M8 and a "brother" of Bashar el Assad! The reservations by the maronites are not able to be ignored. So if you think that the only problem is with your "corporal", then you are simplifying the whole problem of how the President is chosen by the usual suspects... Berri, Jumblatt and hariri... the same people who have help decide lebanese politics for the past 25 years !!!!!!!!!