Driver Shot as He Drives at French Soldiers Guarding Mosque 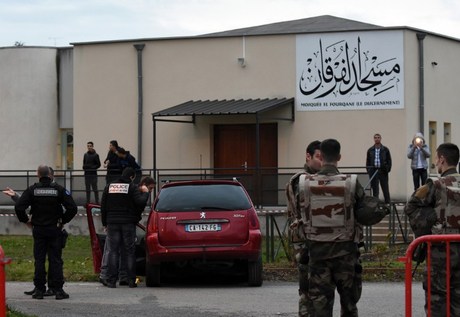 A driver was shot and wounded on Friday as he drove a car at four soldiers guarding a mosque in southeastern France, local authorities said, as the country remained on high alert after the November 13 Paris attacks.

Police said the driver deliberately sped his vehicle at the troops, injuring one of them, as they were stationed in a car park outside a large mosque in a suburb of Valence.

The driver bore down on the team a first time, prompting them to shout a warning, and when he returned for a second pass, they opened fire, they said.

The impact of the car, a Peugeot 307 station wagon, left the soldier with injuries to his knee and shin, police said.

The driver was shot in the arm and the leg and was taken to hospital, the prefecture of the Drome department (county) said.

The defense and interior ministries in Paris said in a joint statement the driver's injuries were "serious but currently not life-threatening."

A stray bullet also hit a passerby, a worshiper at the mosque, in the calf.

"My support for the soldiers attacked in Valence. Fully appreciate our forces, mobilized for the security of France," Valls said in a tweet.

Le Drian and Cazeneuve's statement said the soldiers "responded with defensive fire" against the assailant.

The incident occurred in mid-afternoon, between two prayer sessions, when there was a large crowd outside, the rector of the mosque, Abadallah Dliouah, said.

The prefecture said the mosque was usually very calm, "and worship there takes place peacefully."

The soldier is among 10,000 security personnel protecting sensitive sites around the nation after the deadly jihadist assaults in Paris in 2015.

Attacks in Paris on satirical newspaper Charlie Hebdo and a Jewish supermarket killed 17 people in January 2015, with a series of coordinated shootings and bombings in the city in November leaving 130 people dead and 350 wounded.

The traditional New Year's Eve fireworks display in Paris was canceled over fears of a terrorist attack.

Instead, the large crowds on the Champs-Elysees avenue were treated to a giant video projection on the Arc de Triomphe featuring the French flag, people smiling and images of famous Parisian landmarks, intended as a show of national unity and solidarity.