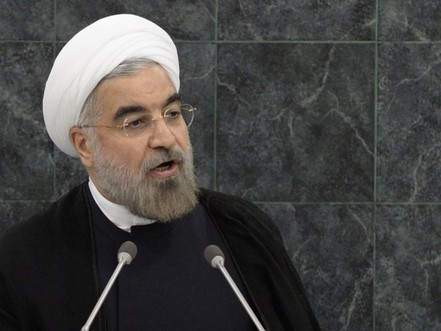 Iran's president Sunday condemned the Saudi execution of a Shiite cleric but also denounced attacks on the Sunni kingdom's embassy and consulate as "totally unjustifiable" after protesters stormed the compounds.

"The actions last night by a group of radicals in Tehran and Mashhad leading to damage at the Saudi embassy and consulate are totally unjustifiable, as the buildings should be legally and religiously protected in the Islamic Republic of Iran," Hassan Rouhani said, quoted by the official IRNA news agency.

At least 44 people were arrested late Saturday for storming the diplomatic missions in Tehran and Mashhad after Saudi Arabia announced it had executed prominent Shiite cleric Nimr al-Nimr and 46 other men on "terrorism" charges.

In Tehran protesters threw petrol bombs and stormed the embassy. The kingdom's consulate in Mashhad, Iran's second biggest city in the country's northeast, was also set on fire.

"I have no doubt that the Saudi government has damaged its image, more than before, among the countries in the world -- in particular (among) Islamic countries -- by this un-Islamic act," he said in a statement.

Yet, the people of Iran "will not allow rogue elements" to use the incident and "carry out illegal actions that damage the dignity of the Islamic republic establishment", he added.

"I call on the interior minister to identify the perpetrators of this attack with firm determination and introduce them to the judiciary... so that there will be an end to such appalling actions once and for all."

why don't you also dig out the number of executions from iran? then you ll be credible .. till then you are just a biased sectarian shia...

In my Country and around 10 years period, Nahar hero Tueni, Harriri and tens of other politicians: Sunni, Shiite, Druze and Christians raised their voice and called the Syrian regime to lift their hand on Lebanon, Do you recall what happened to them?
Hizbollah and Ghazi Kan3an placed car bombed and assassinated them.