Obama Will Not Campaign for Opponents of New Gun Laws 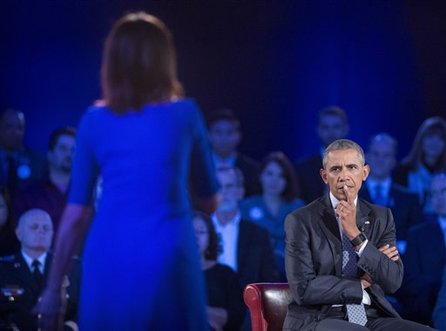 U.S. President Barack Obama on Thursday vowed not to campaign or vote for any candidate, including Democrats, who opposes tighter gun laws, as he publicly challenged critics of his policies.

In a concerted effort to garner support for contentious unilateral measures regulating the sale and purchase of guns, a sometimes combative Obama took to television to make his case.

Around 30,000 people are killed in America every year by guns, mostly in suicides.

In an opinion article in the New York Times and in a primetime CNN debate that featured questions from gun owners, Obama argued for executive measures regulating the sale and purchase of weapons, controversially bypassing Congress.

"I will not campaign for, vote for or support any candidate, even in my own party, who does not support commonsense gun reform," Obama said.

That relatively short list could include Democratic Senator Heidi Heitkamp of North Dakota, who voted against gun reform in 2013.

On television Obama chastised critics who he said have "mischaracterized" his position and falsely believe he wants to repeal the right to bear arms and seize the estimated 350 million weapons in the United States.

"It is a conspiracy," Obama said. "I'm only going to be here for another year."

"Keep in mind I've been president for over seven years and gun sales don't seem to have suffered during that time."

"I've been very good for gun manufacturers," he said.

In a bid to empathize with gun owners, Obama also said he skeet shoots from time to time at Camp David, a presidential retreat near Washington.

Obama repeatedly trashed the organization -- which helps fund the election campaigns of strident gun advocates -- notably for not taking part in the debate near its own headquarters in Virginia.

"There is a reason why the NRA is not here," Obama said. "They are just down the street. And since this is the main reason they exist, you'd think they would be prepared to have a debate with the president."

NRA spokesman Andrew Arulanandam told the event host that "the National Rifle Association sees no reason to participate in a public relations spectacle orchestrated by the White House."

Flanked by survivors and relatives of some of those killed, Obama became emotional as he remembered 20 elementary school children shot dead three years ago in Newtown, Connecticut.

Obama on Thursday admitted he had surprised himself by shedding tears.

According to a CNN poll 67 percent of Americans support the measures -- which include an increase in background checks and registration of gun dealers -- while 32 percent oppose them.

Obama's proposals have prompted a fierce response from Republicans looking to replace him in the White House.

On the campaign trail, party frontrunner Donald Trump said that if the people of Paris had guns, they could have prevented an attack by militants linked to the Islamic State group, who killed 130 people.

Trump also vowed to put an end to gun-free zones, if elected.

"You know what a gun free zone is to a sicko? That's bait," he said.

"I would get rid of gun-free zones in schools and on military bases. On my first day, it gets signed, there's no more gun-free zones."

Senator Ted Cruz, who is also running for the Republican presidential nomination, emailed supporters an image of the president in combat uniform, complete with helmet, claiming "Obama wants your guns."

"I think he's appealing to people's anxieties and insecurities and even outright fears in an attempt to win votes for his presidential campaign," White House spokesman Josh Earnest said.

"That's unfortunate, in some cases it veers into the territory of being irresponsible. But, you know, ultimately, that's clearly what he's up to."