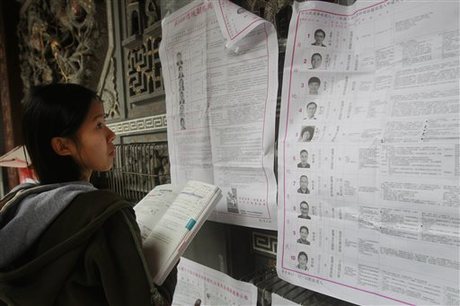 When voters go to the polls in Taiwan Saturday it will be the latest step in the island's fraught evolution into an outspoken democracy and a thorn in China's side.

China and Taiwan have been locked in hostility for decades after the island split from the mainland in 1949, following a civil war.

Even during an unprecedented rapprochement under the current Kuomintang (KMT) government, relations have often been far from smooth as Beijing continues to view Taiwan as part of its territory awaiting unification, by force if necessary.

Now, in the wake of a public backlash over warming relations with China and economic stagnation, Tsai Ing-wen of the opposition Democratic Progressive Party (DPP) is set to take the presidency and become the first woman to lead Taiwan.

With an entrenched lack of trust between the DPP and Beijing, cross-strait relations are set to cool once more as voters seek to shape their country's own destiny.

Following is a brief history of Taiwan's road to democracy:

Taiwan, formerly known as Formosa, is an island off the southeast coast of China between the East and South China Seas. Chinese immigration began in the 17th century and the island came under mainland control after a period of Dutch rule from 1620-62. Taiwan was also occupied by Japan from 1895-1945.

In 1949, about two million supporters of the KMT led by Chiang Kai-shek fled to Taiwan to establish a separate government after losing a civil war to Mao Zedong's communists.

Chiang imposed martial law and it was only after his death in 1975 that Taiwan's path to democracy began to open up.

Opposition parties were allowed for the first time and the DPP began to flourish.

Chiang's deputy Lee Teng-hui succeeded him in 1988 and three years later declared emergency rule over, unilaterally ending a state of war with China.

But Lee riled Beijing by emphasizing Taiwan's statehood and relations soured in 1995 when he visited the U.S.

China fired test missiles into the Taiwan Strait to stop voters choosing Lee as president in the island's first democratic elections in 1996.

But the electorate were undeterred and Lee won by a landslide.

Since electing Lee, voters have repeatedly flexed their muscles to show dissatisfaction with incumbents and put democracy to work.

A divided KMT was unseated in 2000 when Chen Shui-bian became Taiwan's first DPP president, reflecting growing public support for the concept of Taiwanese identity and ending the KMT's 51-year grip on power.

Chen's message became increasingly pro-independence as his leadership progressed, eventually working against him as public fears grew over worsening tensions with China.

His presidency was marked by drama -- he survived an election eve shooting to narrowly win a second term in 2004, with opponents accusing him of staging the attack to gain last-minute support.

Chen left office in disgrace in 2008, mired in a string of corruption scandals that saw him sentenced to 20 years in prison.

Voter sentiment swung back to the KMT with current president Ma Ying-jeou -- who was seen as a safe pair of hands -- coming to power in a landslide victory eight years ago, promising a new era of prosperity through closer ties with China.

Even under Chen, economic ties with China had improved and under Ma more than 20 new deals have been signed.

But voters feel the economic benefits have not trickled down to ordinary people and Ma has been accused of lacking transparency in his dealings with Beijing.

In 2014, in what became known as the Sunflower Movement, student-led protesters occupied parliament in Taipei over a China trade pact, forcing the government to shelve the agreement.

A historic summit between Ma and Chinese President Xi Jinping in November only served to exacerbate fears over Chinese influence.

For the first time ever, the KMT and its associates are expected to lose control of parliament as well as the presidency, as the island's turbulent democratic journey takes yet another turn.