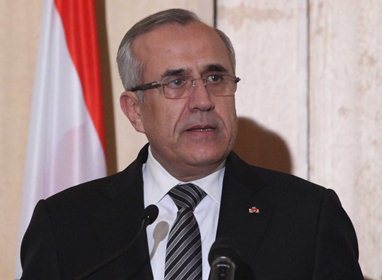 Former President Michel Suleiman slammed media reports alleging that his ministerial bloc and that of the Kataeb party had demanded appointing one of the two Christian members in the military council in return for accepting the appointment of the second by the Change and Reform bloc head MP Michel Aoun.

“We have not and will not demand naming one of the members as a condition to accept the nomination of the other. We continue to call for respecting the mechanism and standards and to distance the military institution from conflicts,” said Suleiman in a tweet.

“Members of the military council are usually named based on a proposal of the Minister of National Defense on the basis of articles 23, 24 and 26 of the defense act and not based on quotas,” added Suleiman.

Media reports said on Sunday that ministers of the Kataeb party and Suleiman refuse to give the privilege to MP Michel Aoun to name the two Christian figures who will fill the vacant posts at the military council.

Kataeb and Suleiman demand that they name one of the two figures as a condition to accept the other, according to reports.

Three military council posts, reserved for a Shiite, a Greek Orthodox and a Catholic, have been vacant for the past two years.