Rescuers Race to Save over 120 Buried after Taiwan Quake 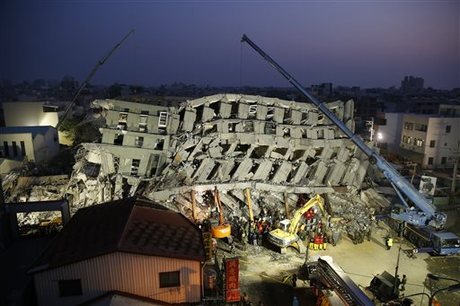 Rescuers raced Sunday to free more than 120 people buried under the rubble of an apartment complex felled by an earthquake in southern Taiwan that left 24 confirmed dead, as an investigation began into the collapse.

The death toll rose as emergency workers dug for survivors of the 6.4-magnitude quake that toppled the 16-storey complex of almost 100 homes in the city of Tainan on Saturday.

Officials said an investigation had been launched as questions were raised over the safety of the residential blocks in the complex.

"We've also commissioned three independent bodies to preserve evidence during the rescue so we can assist the residents if they want to file lawsuits in the future. We will hold the builder responsible if they have broken the law."

Local media reported the construction company that built the complex had gone out of business and also raised questions over the quality of the materials used.

Yueh Chin-sen, whose mother-in-law's family of eight is still trapped, said the residents had complained of defects in the building.

"They complained that the building wasn't well constructed as there were cracks in the walls and tiles fell off after several quakes in recent years," he told AFP.

Rescuers said 126 residents were still missing, with 103 of them trapped "very deep" in the rubble, according to Lai.

"There's no way to get to them direct, it's very difficult," Lai said, adding that emergency workers were having to shore up the ruins to ensure they were secure before digging.

Census records show around 260 people living in the blocks but Lai said it was now thought that more than 300 had been inside.

Officials have said that some students renting rooms would not have been registered as living in the building, and additional family members may have returned there to celebrate the Lunar New Year holiday starting Monday.

Rescuers drilled down into the rubble Sunday, urging survivors to stay strong as they tried to reach them. Several residents were pulled out alive after being buried for more than 24 hours.

Around 200 have been rescued so far and more than 50 others were able to escape unaided.

Among the 24 people confirmed killed by the quake, 22 died in the apartment complex collapse including a 10-day-old girl and two other children.

Tearful relatives huddled by the ruins, hoping for news.

Chen Yu-mei told how her three-month-old son was trapped inside with her sister's family of seven.

"I've been waiting since 4:00 am yesterday and I haven't got any news of them."

Survivors spoke of their terror and relief.

One man told AFP how he was rescued after tapping on a wardrobe that was trapping him.

"I knocked on the closet to get the attention of rescuers who broke the window to get me," said Su Yi-ming, 48, who lived with his family on the sixth floor of the Wei-kuan complex.

Su escaped unhurt while his wife and their two children sustained minor injuries.

The quake struck at a shallow depth of 10 kilometers (six miles) at around 4:00 am Saturday (2000 GMT Friday), 39 kilometers northeast of the island's second-largest city of Kaohsiung.

Taiwan lies near the junction of two tectonic plates and is regularly hit by earthquakes.

The island's worst tremor in recent decades was a 7.6 magnitude quake in September 1999 that killed around 2,400 people.