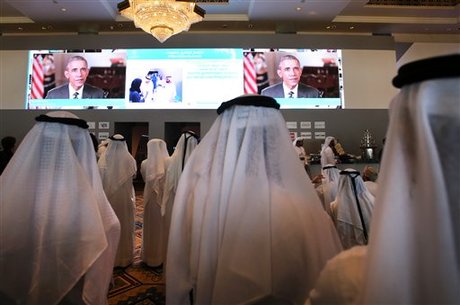 "When governments truly invest in their citizens, their education, skills, and health, and universal human rights are upheld, countries are more peaceful, more prosperous and more successful," he told the opening day of the World Government Summit in Dubai.

"As we have seen in the tumult across the Middle East and North Africa, when governments do not lift up their citizens, it's a recipe for instability and strife," he said in a video address to the conference.

Obama recalled discussing with leaders of the six Arab monarchies of the Gulf at Camp David last year how "true and lasting security requires an inclusive government that serves all citizens".

Several Middle East and North African countries have been rocked by a wave of uprisings demanding reforms that started in Tunisia and led to the 2011 Arab Spring.

Some of the uprisings, such as those in Syria, Libya and Yemen, have morphed into civil wars prompting the rise of extremists such as the Islamic State jihadist group as well as an exodus of millions of refugees to Europe.

"Good governance is the foundation of all development," Kim told participants.

"Many parts of the world are becoming more fragile, making quality leadership and good governance ever more important."

He called for governments to be "transparent in their actions and fully engage with citizens".

"Governments must invest in their people to give them the opportunity to reach their full potential... create business environments that encourage innovation, competition and private sector investments which will in turn create jobs."

More than 3,000 participants from 125 countries, including world leaders and top experts, are attending the three-day summit on governance.

"Please note, across this region and around the world, those of you who embrace reform and truly invest in the lives of your people will continue to have a partner and friend in the United States," Obama told the forum.

If we all ignore his statement, maybe he will forget that he made it. That World Bank guy's, too.