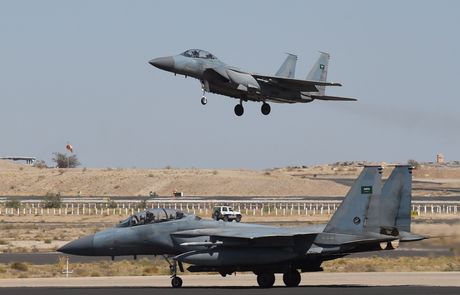 Saudi Arabia has deployed warplanes to a Turkish airbase in order to "intensify" its operations against the Islamic State group in Syria, a senior Saudi defense official has said.

"The Saudi kingdom now has a presence at Incirlik airbase in Turkey," Brigadier General Ahmed al-Assiri was quoted as saying by Al-Arabiya television late on Saturday.

"Saudi warplanes are present with their crews to intensify aerial operations along with missions launched from bases in Saudi Arabia," Assiri said, without providing further details.

Turkish Foreign Minister Mevlut Cavusoglu said Saturday that Saudi jets would be deployed at Incirlik, and that the two countries could participate in ground operations against IS in Syria.

Riyadh and Ankara are both opposed to Syrian President Bashar Assad, whose foreign minister last week warned that any ground intervention would "amount to aggression that must be resisted".

Assiri said the decision to deploy an unspecified number of jets to Turkey followed a meeting in Brussels of U.S.-led anti-IS coalition members, who decided step up their fight against the jihadists in Syria and Iraq.

He stressed that Saudi Arabia had made its decision in coordination with the coalition and said that a ground operation was being planned.

"There is a consensus among coalition forces on the need for ground operations and the kingdom is committed to that," Assiri said.

"Military experts will meet in the coming days to finalize the details, the task force and the role to be played by each country."

Saudi Foreign Minister Adel al-Jubeir also told reporters on Sunday that his country was ready to send special forces to Syria to take part in ground operations against IS, without giving further details.

Turkey on Saturday hit Kurdish and Syrian regime positions in northern Syria, further complicating efforts to end the war, which has killed more than 260,000 people since it began in 2011.

Because Saudi Arabia supports ISIS and Al Qaeda, they only use ISIS as a pretext to enter along with Turkey.

What happend in Yemen to the areas under Saudi control? Look at Aden, it is not partially controlled by ISIS groups and Al Qaeda.
Wahabis supports each other, it is not a big puzzle.

Saudi Arabia have lots of advanced military firepower, but their army is weak and fights only for money and not morale.

Turkey is a stronger army, and they have Ottoman ambitions, their air power though, will be useless due to the russians S-400 systems.
So all we can hope for, is that they are dumb enough to make a ground invasion, so we can kill them aswell.

Yes we can kill them, our Resistance will kill your beloved Saudis, without a second thought too.
Only internet warrior I see around here, is you hiding behind different usernames and use bad language, can you even have a normal conversation without swearing?

You seem very mad and frustrated, too bad your Salafis in Aleppo being encircled?

Hello Mr. cyber bully @the-roar.k.i.super.deluxe
May I wish you a happy valentine day?
I do wish you well!

Let this be a memory from the last Saudi Invasion.

The Yemeni army and resistance are nearing the liberation of Sanaa and you still sit here and blab your mouth off. Why are you so invested apart from your obvious sectarian hatred!

Yemeni resistance is the Ansarullah.
It is the Saudi Army that is trying to move forward, and they are going through a road to hell towards Sanaa, it is not an easy terrain for their tanks to pull through, ofcourse the Saudis do not show the numerous ambushes they have suffered along the way.

The Houthis are not going to surrender, they will fight to the end, and you don't see them whine & cry like you salafis does in Syria, Yemeni civilians gets bombed everyday, and no world community condemns that, because they take care of their own battles.

must be robots then that are flying those F-16s. LOL
Get out of that hate shell that you live in. There is a whole different world out there;)

Yes bonbob, lethal you will become.
"Shed a tear cause I'm missing you"
Not to be prejudice, happy valentines day to you as well.

S.A Is Funding Suni ISIS - 1. ISIS Will Eventually Move To Russia
2. Move To Shia Iran
It Is Better To Fight ISIS In Syria

Lol. This only means more Pakistani mercenaries with no fighting skills in Syria.

Direct intervention is a stupid move
1:people are getting killed and don't know the reason; and those that know the reason are living in comfort outside of Syria. Is it reasonable and moral to advocate more bloodshed?
2.When comes to intervention by national army Turks and Saudis have to consider facing Russia, Iran, Kurds, Syria, Hezb, and Yemen. What will happen to their cities and economies when cities and economic centers are destroyed by missiles and bombs? is intervention a meaningful idea?