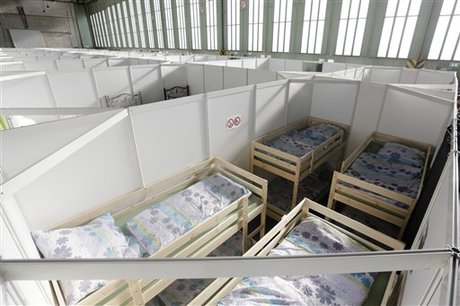 Alaa Ammar fled Syria to escape not just civil war but also the threat of persecution as a gay man. Yet when he arrived in The Netherlands last spring, he did not find the safe haven he craved.

He and four other gay travelers had to face newly arrived asylum seekers at a migrant center in the remote northern town of Ter Apel.

Across Europe, gay, lesbian and transgender migrants say they suffer from verbal, physical and sexual abuse in refugee shelters, and some have been forced to move out. The AP found out about scores of documented cases in The Netherlands, Germany, Spain, Denmark, Sweden and Finland, with the abuse usually coming from fellow refugees and sometimes security staff and translators.

The cases suggest a possible cultural clash: Many migrants are coming from conservative Muslim countries where homosexuality is taboo into European societies that are more open to it. In Syria, for example, homosexuality is illegal, and the militant Islamic State group has killed more than 30 gays in Syria and Iraq over the past two years, activists say.

A similar debate, this time over cultural attitudes toward gender, was sparked after young men assaulted and robbed hundreds of women in several German cities on New Year's Eve. Police described the men as of North African and Arabic origin.

The number of migrants accused of gay abuse are just a tiny fraction of the hundreds of thousands of refugees streaming into Europe. However, most abuse is likely not reported because of European privacy laws and the stigma felt by gay migrants, and there is no official tally across the continent.

In Germany, the Lesbian and Gay Federation counted 106 cases of violence against homosexual and transgender refugees in the Berlin region from August through the end of January. Most of the cases came from refugee centers, and 13 included sexual abuse.

Joerg Steinert, head of the federation in Berlin-Brandenburg, said refugees have been asking gay groups for help all over the country, reluctant to approach police for fear of jeopardizing their asylum applications. Last year, the federation placed 50 people in private homes because the migrant centers were too dangerous.

"These asylum shelters are law-free areas," he said. "When I come to our office on Monday morning, there's usually a bunch of refugees waiting outside in the hallway who need help immediately."

Charities and private shelter operators say they've simply been too overwhelmed by the huge influx of migrants to attend to some refugees' special needs. Swarms of people often live in one big hall, without lockable rooms or gender-separated washrooms.

In Berlin, where four hangars at the former Tempelhof airport were turned into a reception center for 2,100 people, four cases of gay abuse were reported. Maria Antonia Kipp, spokeswoman for private center operator Tamaja, said it's very difficult to create safe spaces for homosexuals when hundreds of bunk beds are separated only by thin wooden boards.

"When we see a dangerous situation or people tell us about it, we'll get the people out and transfer them to smaller shelters," she said.

The German Red Cross said it had a code of conduct banning violence at its shelters. And the Arbeiterwohlfahrt, or Worker's Welfare charity group, said it is trying to create safe spaces in new centers but cannot implement the highest standards it would like.

Some critics say it is up to the German government to protect migrants. But last month, a proposal to increase the security of asylum shelters was taken out of a government bill, despite official reprimands from the European Commission that Germany is not implementing EU safety guidelines.

Without the government, the protection of gay migrants has largely fallen to rights groups and local communities. A special shelter with space for 122 gay and transgender migrants will open in Berlin on Tuesday, and another shelter with ten beds is expected in Nuremberg. Berlin has also appointed a counselor as contact person for the registration of gay and transgender migrants.

The situation is not much better elsewhere. In Spain, for example, two migrants from Cameroon and a third from Morocco were physically abused after their sexual orientation was discovered by others at shelters, according to the Pueblos Unidos nonprofit. The men now have asylum petitions pending before the Spanish government citing their homosexuality as a reason why they deserve refugee status, the nonprofit said.

In Sweden, a court sentenced an asylum seeker to five months in prison last summer for making death threats, along with spitting in the face and grabbing the throat of a fellow refugee in a center in Jonkoping. When the victim collapsed onto the floor, the attacker kicked him unconscious. Witnesses and a surveillance video backed the claims.

The motive was the victim's homosexuality. The attacker was "outraged that Sweden protects homosexuality and all should be killed by slaughtering," according to court documents.

In Finland, cases of gay harassment and downright abuse have also been recorded at refugee centers, according to SETA, a nationwide lesbian, gay, bisexual and transgender group. As a result, some of the centers have separated a secure section for those afraid of sexual harassment.

Other migrants have contacted SETA after fleeing their designated refugee center because of abuse. Earlier this month, a Finnish court gave an asylum seeker a three-and-half-year prison sentence for raping another migrant man at a southern Finnish center.

In Denmark, there have been at least 10 cases of harassment, according to Mads Ted Drud-Jensen from the LGBT Asylum group. He stressed that those figures only represent victims who have been in contact with the group.

"Stepping out of the closet may be hard to do, and not everyone is talking to us," he said.

In the Netherlands, a Dutch human rights group reported earlier this month on regular abuse of gays and lesbians at a large camp that can house up to 3,000 asylum seekers near the city of Nijmegen. The group, The College for Human Rights, said one asylum seeker "has repeatedly found excrement and food in his bed. He is threatened and abused by fellow residents."

The asylum seeker, whose identity was not disclosed, said he feared for his safety because some other refugees carried knives. The report said he often found notes in his bed such as "kill gay" and "we don't want gay in the camp."

When Ammar reported abuse in Ter Apel, he and other gay refugees were put up on the floor of a restaurant for a night. Then they were transferred to another shelter in Apeldoorn.

There too, Ammar said, three fellow refugees attacked him and another man in the communal washroom and slashed them with a knife.

"You could see from their eyes that they wanted to hurt me," he said.

Again, Ammar was transferred, back to a caravan in Ter Apel. Employees with the COA asylum organization advised them to close the doors and windows, he said, but other asylum seekers "opened the windows and said bad things to us."

Spokesman Jan-Willem Anholts said COA does not keep records of complaints of gay abuse, but does have "protective" measures for people at risk. Anholts also raised concerns that creating safe houses for specific groups could lead to a type of "segregation" in Dutch society.

It was only after Ammar received asylum and moved in with a private host in Amsterdam a few weeks ago that he started to feel really safe.

"Who wouldn't like Amsterdam?' Ammar said as he looked carefully left and right before crossing roads — already seasoned at watching out for speeding bicycles in the Dutch capital. "People don't care if I'm gay or not. I can scream 'I'm gay!' and they will say, 'Welcome.'"