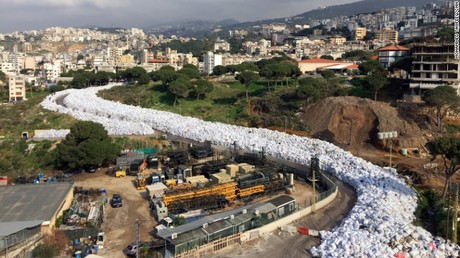 Social media users vented their anger at the Lebanese authorities on Thursday after CNN mocked what it called Beirut's river of trash in a Mount Lebanon town.

“Congratulations on the new fame! (Lebanon) is the best country in the world,” a woman said on her Facebook account after sharing the video of the CNN report.

“It's nice … We are stinking everywhere! Our smell has become international,” said another man.

“You have disgraced us and disgraced the country,” another angry social media user wrote on his Facebook page.

The river of garbage bags snakes its way through a street in Jdeideh that lies north of Beirut.

The landfill, which stretches for hundreds of meters through the town, is the result of the eight-month-long trash crisis.

“To all our great Lebanese politicians thanks for making international news for all the wrong reasons,” a man wrote on Twitter.

“We made the news, now they are working on the Guinness book record,” another angry citizen tweeted.

Lebanon's waste management crisis erupted in July last year when the country's largest landfill that used to receive the waste of Beirut and Mount Lebanon was closed.

Following the closure of the Naameh landfill, garbage began piling up on the streets of the capital and Mount Lebanon.

Agriculture Minister Akram Shehayyeb, who was in charge of the garbage file, proposed decentralization to resolve the crisis.

His plan was dropped by the government after it approved a scheme to export the waste.

But it turned out that the company, which had been tasked with exporting the trash to Russia, had forged the permits.

Following the scandal, the authorities were left without a plan, with some officials calling for decentralization and allowing municipalities to collect and treat their own waste.

Council for Development and Reconstruction (CDR) spokeswoman Mona Kalot said there was no backup plan in place.

"We don't have a solution, but they're working on something else," she told CNN.

A river of garbage bags snakes its way through the suburbs of Beirut.To read more about it click here: http://cnn.it/1S1lfO2

not only have we rivers of trash but we also have resistance.

and 2 days ago, i read what a retarded poster jabal10452 was saying he was so proud of being lebanese and not arab. Not even in Somalia you have incompetent and corrupt politicians like you have in Lebanon.

It is not the problem, this river of garbage, it is the symptom of the illness that is Lebanon. In every society there is a point beyond which the people are not willing to sink. A point where the people are stirred to take action. The Lebanese people are apparently willing to take a dysfunctional government, and not be moved to action; to take a foreign militia establishing an order in the country by force of arms, and not be moved to action; no electricity, so what? No water treatment plants, we will swim in the ocean next to raw sewage. No clean water supply, we will drink bottled water. No garbage clean up, we will live next to the garbage.

Blame the politicians?? No, they are responsive to those who give them money. The people are not the sources of their power at all. The people are beggars who have their hand out and apparently think more of their handouts than living next to garbage piles. No, the political class know their sheeple well. They know that the people are docile and will not move to change the order of things and so there is no incentive to do anything, not even pick up the trash, without some member or other of the political class being paid handsomely for the service and of course, the sheeple stand with their hands out for the patronage money that will come with the contract.

What a disaster but the real shame is in accepting incompetence and complete chaos at all levels of government.

Those are profound word Beiruti. Sadly, nobody cares. The rich is getting richer, and the poor is helpless. The people in control don't even try to hide their corruption anymore. It took one million people to kick the Syrian occupation army
out of Lebanon. It is going to take more to make any change to the country's misery.

The Lebanese people have become desensitized to their misery. And those who dare to protest will eventually be silenced by bribes or by bullets. Those who can will leave, and the rest will accept their reality and bow in submission. We are witnessing a painful and slow death of a nation