Berri: Achieving Peace in Syria Will Enable Lebanon to Overcome its Crises 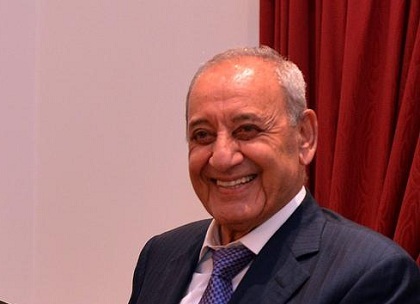 Speaker Nabih Berri voiced on Saturday his support for the ceasefire deal that was reached in Syria, hoping that it will pave the way for peace in the neighboring country.

He said in a statement: “Peace in Syria will allow Lebanon to overcome its crises.”

“Peace in Syria is a great Arab, Islamic, and Middle Eastern necessity and it is a guarantee for world ad regional peace, because Syria, as history and the present have demonstrated, is a portal for peace and war in the region,” he continued.

“Syria's exit from its current reality and its entry to a prosperous spring will restore the Palestinian cause as the central Arab and Muslim issue,” Berri stressed.

“We hope that God will ensure the success of the Syrian ceasefire test as the extinguishing of its fire and the return of its people to their homeland will emphasize Lebanon's peace,” he declared.

Calm prevailed Saturday across much of war-ravaged Syria on the first day of a landmark ceasefire, as a task force led by Moscow and Washington prepared to begin monitoring the truce.

The nationwide cessation of hostilities, which does not include jihadist groups, is the first pause in a five-year civil war that has claimed 270,000 lives and displaced more than half the population.

He said in a statement: “Peace in Syria will allow Lebanon to overcome its crises.”.......
Now I have peace of mind. Lebanon will be able to have a President, clean street, 24/7 electricity, best water system, jobs for the educated youth, industries. I wass worried I thought all of our ills were due to the thugs called political leaders we have, it turnedd out to be the war in Syria. At least he did not go as far as Liberating Palestine and taking over all of Lebanon before our crises are resolved. Thank you indeed Mr. thief.

What a photo, it is an infomercial for invisiline teeth braces.