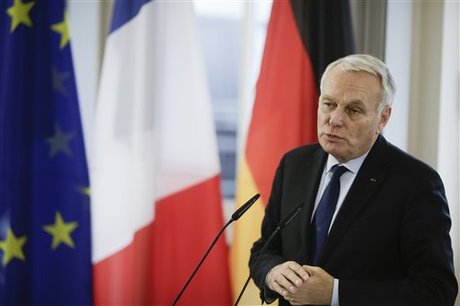 French Foreign Minister Jean-Marc Ayrault on Monday called for a new meeting of a U.N.-backed task force overseeing a fragile Syria ceasefire "without delay" to evaluate a range of breaches.

"We have received indications that attacks, including air strikes are continuing in areas controlled by the moderate opposition," Ayrault told reporters in Geneva.

"This must all of course be verified. France has therefore asked that the task force overseeing the implementation of the cessation of hostilities meets without delay," he said on the sidelines of the U.N. Human Rights Council.

His comments came as a fragile ceasefire, negotiated by Washington and Moscow and backed by the U.N., entered its third day largely intact despite reports of violations on both sides.

A special international task force co-chaired by the United States and Russia met Saturday, making a positive assessment after the first hours of the cessation of hostilities.

Ayrault insisted France "fervently wants an end to hostilities," adding that it "would be vigilant about its concrete application".

"Let us not be mistaken: the Syrian drama is the measure with which all our efforts in the realm of human rights will be judged," he said.

"For now, we must observe that we have failed."

The ceasefire, which does not apply to territory held by the Islamic State group and al-Qaida affiliate Al-Nusra Front, is considered the biggest diplomatic push yet to help end Syria's conflict, which has claimed more than 270,000 lives since March 2011.

Ayrault also reiterated France's line that all perpetrators of violations in Syria must be held accountable, calling on the U.N. Security Council to refer them to the International Criminal Court in the Hague.

France, he said, "will not be on the side of those who want to place human and humanitarian rights in parenthesis, (sweep them) under the carpet".