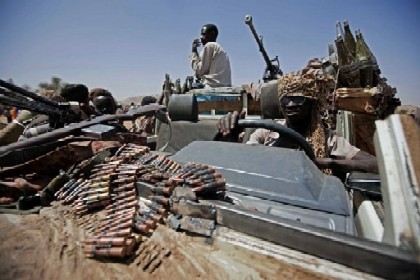 The joint force has operated in Darfur since 2010, seven years after ethnic minority insurgents in the western region rebelled against the Arab-dominated Khartoum government.

"In a criminal incident, Major Al-Nur Abdelkarim was killed on Tuesday. He was an officer from the Chadian side in the joint forces between Sudan and Chad," army spokesman Brigadier Ahmed Khalifa al-Shami told AFP by phone.

The officer, the first Chadian fatality in the force since 2013, when troops clashed with tribesmen, had been patrolling near the Baida checkpoint, south of West Darfur state capital Geneina.

Sudan's military said it had arrested three suspects and that Chad "understands the matter is a regular criminal incident".

The military gave no further details of the killing.

Before establishing the joint patrols, Chad and Sudan traded accusations of backing rebels on each other's territory.

The force -- whose exact strength is unknown -- is mandated to monitor the border between Sudan and Chad and tackle smuggling between the countries.

More than 300,000 people have been killed in the Darfur conflict and there are 2.5 million displaced people living in the region, according to the United Nations.

Shami said the security situation around the area where the Chadian officer was killed was "fluid" because of the conflict.

"Outlaws have appeared in the region, some of them from the (rebel) movements and they have carried out acts like this," he said.