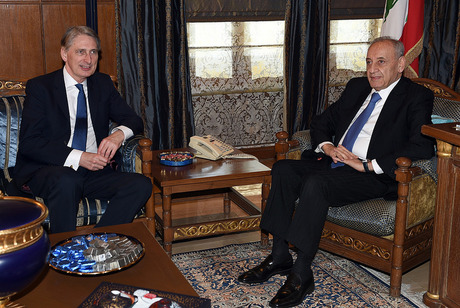 The meeting did not take place at the Grand Serail because Salam is in mourning over his mother’s death.

Hammond said after the meeting that he discussed with the Lebanese PM Britain’s military support to Lebanon.

He pledged to continue in the future to consolidate Lebanon’s security in the confrontation with jihadists.

"We are delighted by the way that the UK support has been translated by the Lebanese armed forces in strengthening border security and enabling the armed forces to take the fight to Daesh and keep Lebanon safe from the incursions of Daesh," he said, using the Arabic acronym for the Islamic State group.

In a joint press conference after the meeting, the British official declared that the UK will maintain its support for the Lebanese army and that the refugees in Lebanon are "temporary guests."

"We underline the importance of creating the conditions in Syria that will allow refugees to return, once it’s safe for them to do so, and take part in the rebuilding of their country," he said.

He also stressed that Lebanon must not await the regional developments to fill its presidential void.

Bassil for his part warned that Lebanon "considers the long residency of refugees a permanent residency that violates the Lebanese constitution."

A statement released by the British embassy said Hammond called on Lebanese leaders to “elect a President to take the country forward” and reiterated that the UK is “ready to work with the next President of Lebanon, whoever that may be.”

Hammond also visited the Lebanese military training facility in North Lebanon, and announced the UK’s intention to provide an additional £4.5m for the training of over 5,000 Lebanese army soldiers, and “a further £15.3 million for the training and mentoring of the Lebanese Armed Forces’ Land Border Regiments, over the next three years.”

“Our aim is for Lebanon to have secured 100% of its border with Syria, and for the UK to have trained over 11,000 Lebanese soldiers in the specialist techniques of urban counterterrorism by 2019,” Hammond said.

why is Berri involved in these meetings?

UK Foreign Secretary Meets Lebanese Officials, Announces £19.8 Million to LAF ....
$199.8 is nothing. It is how much Berri alone drains from the State every month. State resources in the 100s of Millions that could have gone to the LAF are instead going into Berri's pockets and HA pockets to finance their thugs. They put their hands on big portion of the Lebanese farm.