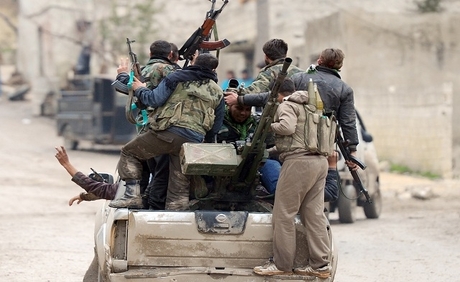 Rebels in Syria are edging closer to the key northern town of Dabiq held by the Islamic State group, pushing the jihadists out of more than a dozen villages, a monitor said Tuesday.

Rebel forces are now within 10 kilometers (six miles) of Dabiq, a town of significant symbolic importance to the jihadists, said Rami Abdel Rahman, head of the Syrian Observatory for Human Rights.

"Since mid-March, Islamist and rebel fighters backed by Turkey have seized control of a wide border area spanning 15 kilometers (10 miles)," said Abdel Rahman, whose Britain-based group relies on a wide network of sources inside Syria.

The rebel groups, including Faylaq al-Sham and the Sultan Murad Brigades, have seized 14 villages since mid-March, he said, adding that Turkish artillery fire on IS positions had bolstered the offensive.

Dabiq, a town in Syria's Aleppo province captured by IS in August 2014, is of crucial ideological importance to the group.

The town, which according to a Sunni Muslim prophecy will be the site of an end-of-times battle between Christian forces and Muslim fighters, has become a byword and rallying cry for IS.

The group has named its English-language online magazine "Dabiq" after the town.