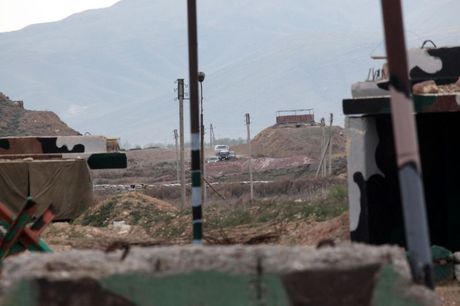 Azerbaijani and Armenian forces on Wednesday said they were largely observing a truce that halted four days of clashes which claimed scores of lives in the worst outbreak of violence in decades over the disputed Nagorny Karabakh region.

"The ceasefire was largely observed overnight along the Karabakh frontline," the Armenia-backed separatist defense ministry in Karabakh said in a statement.

Azerbaijan's defense ministry reported isolated firing from the Armenian side but said its forces were "strictly abiding by the ceasefire agreement" hammered out on Tuesday by the Azerbaijani and Armenian army chiefs during a meeting in Moscow.

Armenian defense ministry spokesman Artsrun Hovhannisyan said that sporadic shooting continued on Wednesday "including from tanks, but not as intensive" as during the last days.

An AFP photographer in the village of Matagis in Karabakh, some 10 kilometers (six miles) from the frontline, confirmed that the situation was calm.

The fragile truce comes after at least 75 people were reported killed in the worst fighting over the disputed mountainous region since it was captured from Azerbaijan by Armenian separatists in the early 1990s.

Azerbaijan's army claimed to have snatched control of several strategic locations inside Armenian-controlled territory, effectively changing the frontline for the first time since an inconclusive truce ended a three-year war in 1994.

The military said it took control of the strategic Lala-Tepe and Talysh heights and the village of Seysulan.

An AFP journalist in Lala-Tepe heights confirmed that the area was under Azerbaijani control.

Armenia however dismissed the Azeri claims to have regained ground as "untrue."

"Even if certain Armenian positions were at some point taken by Azeris, now they have all returned under Karabakh's control," Hovhannisyan, Armenia's defense ministry spokesman, told AFP on Tuesday.

Armenian President Serzh Sarkisian on Wednesday urged the international community to respect Karabakh's right to determine its own future.

Speaking after a long-planned meeting in Berlin with Chancellor Angela Merkel, he took a swipe at Armenia ally Russia, saying it was "painful for us that Russia and other countries... sell weapons to Azerbaijan."

Merkel called on the two sides "to do everything in their power to stop the bloodshed and loss of life" and said international mediation efforts were "of the greatest urgency".

The German leader also said she would host Azerbaijan's President Ilham Aliyev for talks in June.

US, French and Russian envoys -- who co-chair the so-called "Minsk Group" that has long mediated Karabakh peace talks -- on Wednesday met with Aliyev in the Azeri capital Baku and called on both sides to step up efforts to end the fighting, AzerTag news agency reported.

Both sides accused each other of triggering the latest outbreak of violence, which has sparked concern of a wider conflict in the region.

Azerbaijan said 31 of its soldiers and four civilians died in the bloodshed, while Karabakh's separatist authorities reported the deaths of 35 military and five civilians during the fierce clashes that erupted on Friday night.

The bloodshed was the worst since the early 1990s, when Armenia-backed separatists seized control of Nagorny Karabakh, a majority ethnic Armenian region inside Azerbaijan, in a war that claimed some 30,000 lives.

The two sides have never signed a peace deal, despite the 1994 ceasefire, and sporadic violence along the line of contact regularly claims the lives of soldiers on both sides.