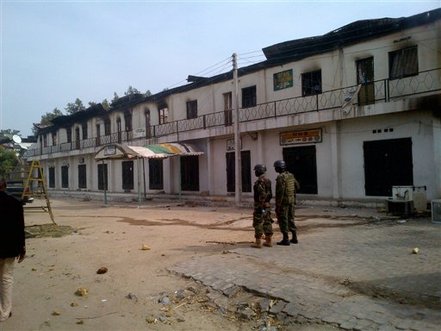 The attack on Zango village, in the Gulani district some 150 kilometers (94 miles) south of the Yobo state capital, Damaturu, happened overnight on Tuesday to Wednesday, said Aisami Mamman.

It came two weeks after a similar attack on two nearby villages left at least 20 dead, he added.

"They (Boko Haram) came around midnight (2300 GMT Tuesday) and started firing gunshots in the village. This prompted residents to flee into the bush," said Mamman.

"They pursued them, shooting at them while others set fire to the whole village. The whole village was burnt. Eleven people were killed and several others were injured, six of them critically.

"They were brought here to Damaturu where they are receiving treatment for gunshot wounds."

The motive for the attack was not immediately clear but previous strikes have seen Boko Haram steal cattle or foodstuffs.

The hit-and-run attack has been a trademark of the Islamic State group affiliate but such incidents have become rarer because of a concerted military counter-offensive in the northeast.

Troops have over the last year wrested back territory lost to the militants in 2014, scattering fighters and cutting off their supply lines.

Boko Haram fighters have conducted a number of attacks on remote villages after arriving on horseback and even bicycles because of a shortage of fuel for vehicles or motorbikes.

Mamman suggested the attackers in Zango came from the Sambisa Forest area of neighboring Borno, where Boko Haram has long had camps.

"Exactly two weeks ago there was a similar attack on two villages nearby. They attacked Gurum and Dokshi villages," he said in an account of both incidents supported by another militia member.

"They burnt them completely and killed more than 20 residents."

Boko Haram has killed nearly 1,900 people since President Muhammadu Buhari took office in May last year, according to AFP reporting.

Overall, an estimated 20,000 people have been killed since the start of the insurgency in 2009.