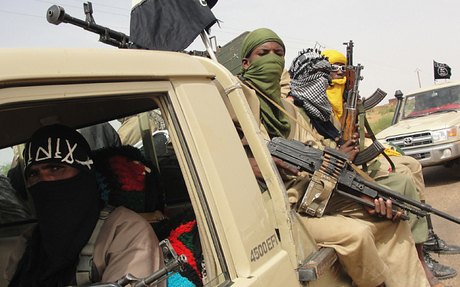 Islamist group Ansar Dine said Thursday it was holding three Red Cross workers captured in northeastern Mali last weekend and called for the release of a jihadist arrested by French troops for their safe return.

"We have three people who work for the Red Cross. We want Barkhane (French forces) to free Miyatene Ag Mayaris before we will release them," Nourredine Ag Mohamed, a senior militant in the group, told Agence France Presse.

An ICRC spokesman in Bamako had previously confirmed three of its staff were being held by an unknown group that had intercepted them on April 16, while a fourth had been released.

Ansar Dine is one of several active jihadist groups roaming Mali's north, and picked up the workers in the restive region of Kidal, where the Red Cross said they were carrying out field work.

The ICRC said Thursday it had not received the claim of responsibility but was working with several key players in Mali to ascertain what had happened.

"We are in contact with all the relevant people in the area ... to get hold of more precise information," ICRC spokeswoman Claire Kaplun told AFP at its Geneva base, including local leaders, the Malian authorities and French troops.

The ICRC has not yet released their names or nationalities.

Four Red Cross workers had camped in an area where French forces in the Barkhane anti-terror mission were carrying out operations, the ICRC has previously said.

The team were flagged down in their vehicle "by someone on a motorbike, who told them to follow him," Valery Mbaoh Nana, ICRC spokesman in the Malian capital Bamako, told AFP on Tuesday.

Mbaoh Nana said that according to information that had reached the ICRC, the three hostages "are being held in acceptable conditions. They are not being tortured, they have not been physically maltreated."

The ICRC spokeswoman in Geneva said the details of the conditions of detention "came from the staff member who has been released."

Since then, there had been no further contact, she said.

It is the successor to a military intervention that freed Mali's vast, desolate north from the control of Tuareg-led rebels who allied with jihadist groups linked to Al-Qaeda in 2012.

A protest against foreign forces including Barkhane left one demonstrator dead on Monday, underlining simmering tensions between the local population and UN and French troops based in the area.