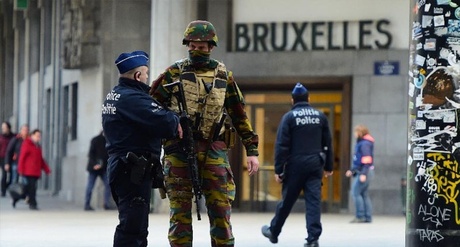 A Swedish suspect in the Brussels and Paris attacks has told investigators that he dumped the explosives that he carried onto the Belgian capital's metro system into the toilet, reports said Friday.

Osama Krayem, 23, doused the home-made TATP explosive that he had carried into Maalbeek metro station with water before trying to dispose of it in the lavatory of the apartment where the attackers were based, La Libre Belgique newspaper said.

It said investigators thought his claims were "credible" as TATP, the favored choice of the Islamic State group as it can be made from readily available chemicals, is in crystal form and dissolves in water.

Belgian prosecutors declined to confirm or deny the reports when contacted by AFP and Krayem's lawyers were unavailable for comment.

Krayem, 23, was arrested on April 8 and charged the next day with "terrorist murders" over last month's suicide blasts at Brussels airport and Maalbeek station in which 32 people were killed and more than 300 injured.

He has also reportedly been charged with links to November's Paris attacks which left 130 people dead.

Both attacks have been claimed by the Islamic State group and appear linked to the same cell of attackers.