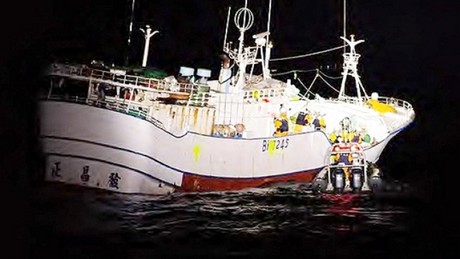 Taiwan Sunday sent two patrol ships to waters surrounding a Japanese atoll amid a dispute over the seizure of one of the island's fishing boats there.

The detention of the "Tung Sheng Chi 16" near Okinotori-shima last week angered Taiwanese officials, who say Tokyo has no authority over the area.

A Taiwanese coast guard ship and another from the Council of Agriculture departed from the southern port of Kaoshiung Sunday.

"Japan has no right to ban our fishing boats from the area," Taiwan's coast guard administration said in a statement.

"The government will resolutely defend the rights and freedom of our fisherman in international waters."

The mission will last for one to three months.

Between 100-200 Taiwanese boats fish in the waters around Okinotori-shima each year.

Japan say it has exclusive rights in the 200 nautical mile area surrounding the uninhabited atoll in the Philippine Sea.

But in addition to Taiwan, China and South Korea also reject the Japanese claim.

The maritime row is straining normally friendly relations between Taipei and Tokyo.

It follows a stand-off more than three years ago over a chain of islands in the East China Sea, when coastguard vessels from both sides attacked each other with water cannons.

The islands -- known as Senkaku in Japanese and Diaoyu in Chinese -- are controlled by Japan but claimed by both China and Taiwan.

But in 2013 Japan and Taiwan forged a fisheries agreement covering the waters off the island chain.