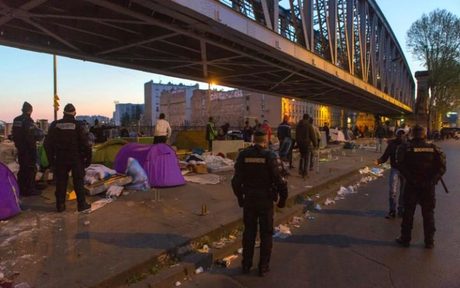 Police used tear gas on Wednesday to disperse protesters as they evacuated a high school under renovation in Paris that has been occupied by migrants for two weeks.

Protesters, some masked and hooded, had formed a human chain around the high school in the north of the French capital to try to prevent police entering in the early morning raid.

Demonstrators pelted the police with objects and chanted "everyone hates the police", an AFP journalist saw.

Police entered the school by forcing their way in through another door where tables and chairs were piled up to try to block their passage.

"This morning the police gassed us and pushed us out of the way. At midnight we built a barrier of tables and chairs, but they moved it all out of the way," said Emmanuel, a Ghanaian in his 20s who left the school when the police entered.

"It's better here than being on the street," he said. "I don't know where they want to take us."

The school is currently closed for renovation works and it was empty when 150 migrants occupied part of the building on April 21-22.

They are mainly from Afghanistan, Eritrea, Somalia, Sudan and Yemen.

Clementine Verschave, from a charity which helps migrants, said: "There are a lot of women among the migrants in the school, including two who are pregnant."

Eric Coquerel, from the far-left Left Party who was among the demonstrators, said the police had used "unjustified force".

"This school is empty and has no purpose. These people are better off here than in the road," he said.

The evacuation of the school was the second time this week that authorities in Paris have taken action against migrants.

On Monday, riot police evacuated a makeshift camp set up around a metro station and took 1,600 migrants to an accommodation center.