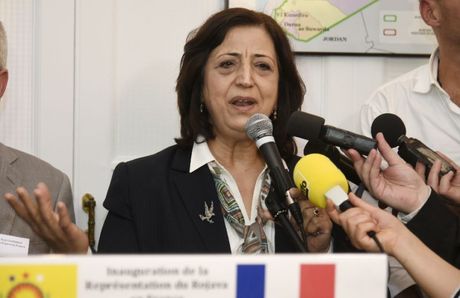 Syrian Kurds, who in March unilaterally proclaimed the creation of a federal region in northern Syria, on Monday opened a representative office in central Paris with several celebrities attending the launch.

The office is not officially recognised by the French foreign ministry which views the opposition Syrian National Council as the "legitimate" representative of the Syrian people.

The launch of the Rojava office -- the name of the self-proclaimed federal region -- was attended by former French foreign minister and Doctors Without Borders co-founder Bernard Kouchner, philosopher Bernard-Henri Levy and other leading Parisian figures.

The move follows the opening of similar representative offices in Moscow, Berlin and Stockholm.

"Our priority is to defeat terrorism and create stability in Syria," said Sinam Mohamed, a Rojava representative.

The Damascus government and the Syrian opposition do not recognise the region.

Washington has said it will not recognise any autonomous regions the Syrian Kurds set up under their planned federation but it has also said that it will continue to work closely with the Kurds.

Syria's conflict has evolved from a popular uprising to a multi-faceted war that has killed more than 270,000 people and displaced millions.

Kurds comprise about 15 percent of Syria's population and Kurdish fighters have been backed by Washington in the battle against the Islamic State group.

Moscow has also steadily built up its alliance with the Kurds after a fallout with Turkey over the downing of a Russian warplane last November, pushing for the inclusion of the Syrian Kurds in UN peace talks.