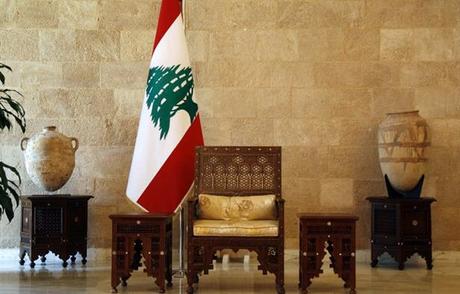 Lebanon has officially completed two years of vacuum in the presidency with no end in sight to the dispute that has crippled the country's top post since May 2014.

Speaker Nabih Berri lamented the ongoing vacuum, saying that the “sooner we elect a president, the sooner we escape the threat of division or federalism that is lurking around us.”

Former president and former head of the Kataeb Party Amin Gemayel described the situation as a “moment of abandonment by some Lebanese leaders, who have not yet grasped the severity of the vacuum.”

“Neighboring countries are passing through a severe situation, which is being dragged to Lebanon through our own free will,” he remarked.

He hailed foreign efforts to resolve the deadlock, but noted that “ultimately this is a Lebanese issue that should be resolved through 128 lawmakers electing a president.”

“We cannot rely on foreign efforts as long as the Lebanese people have not yet realized the danger of what is happening in our country,” warned Gemayel.

Head of the Mustaqbal Movement MP Saad Hariri told An Nahar that the “prolongation of the vacuum will be a black mark against all who are not attempting to end the presidential vacuum and the current farce of waiting and obstructing the role of parliament.”

“It is unfortunate that Lebanon is a victim of idiotic policies that disregard the constitution and national interest,” he lamented.

Those obstructing the elections “are embroiling Lebanon in regional conflicts and using the vacuum as a means to continue on pursuing foreign agendas.”

“Two years without a president is not something to be proud about.”

Hariri stressed: “We have been fulfilling our duties and it is up to the others to head to parliament and elect a president that Lebanon deserves.

“We must ask why Russia and the Syrian-Iranian alliance do not want a president,” he continued.

“Russia and Iran can simply reach a settlement that favors Aoun against Franjieh or vice verse,” he added.

Jumblat called on the two candidates to “carry out a revision” that would lead one of them to withdraw from the presidential race or the election of a third candidate.

For his part, Franjieh noted that the most important development at the moment is “everyone's belief of the need to elect a strong president, who truly represents Christians and the nation.”

He underlined the need to end the two-year vacuum, demanding that political pressure “based on objective foundations” should be adopted to elect a president.

Once successful, a new constitutional formula should be devised to prevent future obstructions of the election of a president, revealed Franjieh.

Numerous electoral sessions have been staged, but all but one failed due to a lack of quorum at parliament in wake of a boycott by Aoun's political bloc and that of Hizbullah.

Hizbullah declared earlier this year that it would boycott the polls unless it receives guarantees that its candidate, Aoun, is elected head of state.

This stance has drawn criticism from the March 14 camp and Jumblat, who accused Hizbullah's main ally, Iran, of obstructing the elections.

A traitor is named: caporal.

Iran, to some degree wants the status quo as well, but for different reasons. Hezbollah is overextended in Syria and will be so for the foreseeable future. Hezbollah cannot take a challenge in its home base of Lebanon. If Lebanon were properly led, especially at this time, Hezbollah could not afford a political battle at home, in Lebanon, while it is prosecuting Iran's defense of the Assad Regime in Syria.
So by a confluence of interests, the Lebanese Christian political class has found common cause with Iran to maintain this status quo in Lebanon, that is, a status without State institutions.