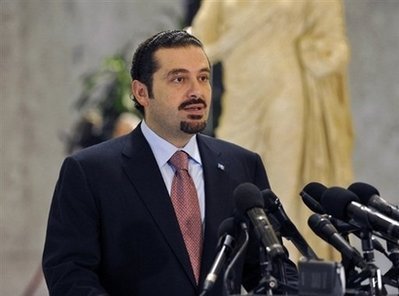 Al-Mustaqbal movement chief ex-PM Saad Hariri stressed on Thursday that his party has never sought to monopolize power as claimed by Hizbullah leader Sayyed Hassan Nasrallah in his latest speech, and urged him to give ear to the “silent Shiite majority” that opposes his interventions in Syria and Yemen.

“If the Mustaqbal movement was seeking monopolization to dominate authority, it wouldn't have approved a hybrid proportional draft law with the Lebanese Forces and the Democratic Gathering bloc at the parliament,” said Hariri via Twitter.

During his speech on Wednesday, Nasrallah accused Mustaqbal and the Progressive Socialist Party without naming them of “rejecting proportional representation because you are insisting on monopolization and unilateralism in your sects and regions,” he said.

Hariri added: “We have heard Sayyed Hassan say that he adheres to the opinion of people representing around 20 per cent or a little bit more of any (political) group. How about that he listens to the majority of the Lebanese, including the silent majority of the Shiite sect, before he involves our country in his Janissary wars from Syria to Yemen.”

“Or is that democracy from Sayyed Hassan's perspective says that proportion should be traded in Lebanon, while slaughtering any proportion of the Syrian people who do not join the unilateral stance of the tyrant in Damascus?” remarked Hariri.

He highlighted the vacuum at the presidential post and blamed Hizbullah for confiscating the people's need to elect a president, he asked: “In your opinion (Nasrallah) what is the proportion of the Lebanese who want a president to be elected? And how is their will respected taking into consideration the fact that he has been obstructing the elections for two years now?”

Lebanon has been witnessing a state of presidential vacuum since the term of President Michel Suleiman ended in May 2014.

Actually more like Liberated the south from Israeli occupation, but Hariri ofcourse and you Saudis wont mention that ever.

So Hariri says Hezbollah are slaughtering the proportion of the Syrian people who do not join the unilateral stance.
So ISIS and Nusra believes in democracy now Mr. Hariri?

Majority of the Syrian people lives in areas controlled by Assad and the Syrian government, and they would rather want Assad than Saudi Wahabism anytime.

Chris here is no Christian, that's for sure.