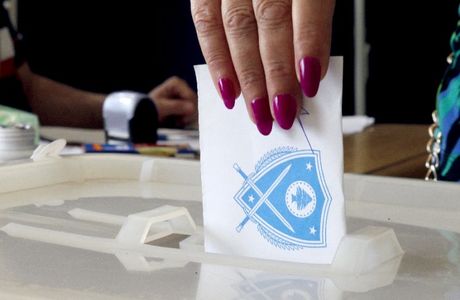 Geagea had stated earlier during the day that it would be inevitable that the elections take on a political turn if it seeks to advance its developmental ambitions to which Hbeish later said that the residents of the town themselves will further its aspirations.

Geagea had vowed that the elections will transform the town from an “isolated island,” which prompted Hbeish to respond: “Qoubaiyat was never an isolated island.

“It has produced several statesmen and members of the army. So how could it ever be labeled as an isolated island?

“Qoubaiyat and its residents have themselves placed themselves on the map in Lebanon and we are not waiting a municipal list to place it on the map.

“This is a democratic competition and we must not call it a battle,” declared the MP during a press conference.

The LF and Free Patriotic Movement back a list headed by Tony Mikhael and Jean Chidiac.

It is running against a list headed by current municipal chief Abdo Abdo, who is backed by Hbeish, former MP Mikhael al-Daher, and the Kataeb Party.

Hbeish added: “Some sides are trying to drag non-Christian parties into the Qoubaiyat battle. The residents of the town are much greater than those seeking to stoke sectarian sentiments.”

Moreover, he denied claims that the Mustaqbal Movement is meddling in the polls.

“The movement had announced that it is not interfering in the Sunni-majority areas in the elections in Akkar, so why would it do so in the Christian-majority Qoubaiyat?” he asked.

“We are not undermining the people's intelligence,” he stated, while noting the alliance between the FPM and MP Khaled al-Daher.

“Why shouldn't these sides propose municipal agendas” instead of political ones, he wondered.

“Claims of the Movement's meddling in these elections is a sign of weakness of the other.”

Furthermore, Hbeish stressed: “It is wrong to portray the Qoubaiyat battle as if we object to Christian consensus. We will not abandon the residents of our town.”

“Does the other camp believe that slogans alone will win over the people? A lot of services are needed on the ground,” he said.

Earlier, Geagea had defended the list running for the municipal council in Qoubaiyat, saying that the area seeks to become in the “heart of Lebanon.”

He said: “The list is being accused of having political affiliations and this is not an accusation.”

Geagea added: “We support those who want to transform Qoubaiyat from an isolated island to a developed area.”

“Taking it into the heart of Lebanon requires those who have such policies and such policies mean that candidates have to be linked to parties,” he explained.

The final round of the four-stage of the municipal elections are set to be held in the North on Sunday.

Hakim made a Historical mistake by joining the Caporal-Ebola-3ameel who is destroying Lebanon!