Syria Army Thrusts into IS Bastion as Kurds Advance from North 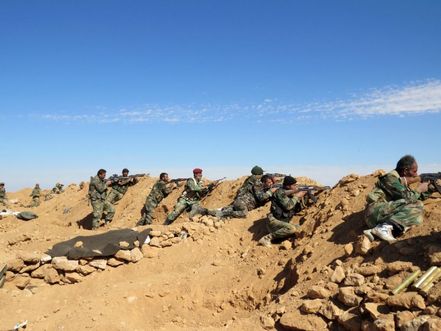 Russian-backed Syrian troops pushed into the Islamic State group's bastion province Raqa Saturday, threatening to catch the jihadists in a pincer movement as US-backed Kurdish-led fighters advance from the north.

The lightning advance from the southwest with Russian air support brought the army to within 40 kilometers (25 miles) of the Euphrates Valley town of Tabqa, site of the country's biggest dam, the Syrian Observatory of Human Rights said.

It was the first time that government troops had entered Raqa province since they were ousted by IS fighters in August 2014.

He said that the twin offensives which threaten to cut off IS-held Raqa from jihadist-held territory along the Turkish border raised suspicions that Moscow and Washington were covertly coordinating operations by their respective Syrian allies.

"It seems there has been an undeclared coordination between Washington and Moscow," he said.

At least 26 jihadists and nine government troops and militia were killed in the army's advance, according to the Britain-based Observatory, which relies on reports from medics and activists on the ground.

When IS overran the area with its garrison and airbase in 2014, it summarily executed 160 captured regime troops.

- IS under multiple attack -The jihadists are facing counter-attacks on multiple fronts.

Arab and Kurdish fighters backed by Washington have launched an assault on the strategic Manbij pocket further up the Euphrates on the Turkish border, regarded as a key entry point for foreign jihadists.

Hundreds of kilometers (miles) downstream in neighboring Iraq, elite Iraq troops have launched an assault on the emblematic IS bastion of Fallujah.

Washington has deployed more than 200 special forces troops in support of the Kurdish-led Syrian Democratic Forces, which it regards as the most effective fighting force on the ground against IS in Syria.

The SDF controls a large swathe of northeastern Syria along the Turkish border and another border enclave in the northwest.

The SDF's offensive against the Manbij pocket is aimed at seizing the last stretch of border still under IS control and denying the jihadists any opportunity to smuggle in recruits and funds.

The US military said the assault had captured more than 100 square kilometers (40 square miles) of territory from IS this week.

IS has hit back with an offensive against two towns held by non-jihadist rebels further west in a bid to enlarge the territory it holds on the border.

Washington has dropped ammunition to the rebels defending the town of Marea in a bid to stop jihadists overrunning it, a US official confirmed.

The supply lines from neighboring Turkey have made the northern border region one of the most contested battlegrounds of Syria's five-year-civil war.

The region is now controlled by a myriad of rival armed groups, although IS and the SDF have put other rebel groups on the back foot.

Washington's support for the SDF has strained relations with NATO ally Ankara as its largest component is the Kurdish People's Protection Units (YPG).

Ankara regards the YPG as an arm of the Kurdistan Workers Party (PKK) which has fought a three-decade insurgency against the Turkish state.

To allay Turkish concerns, Washington has sought to boost the Arab element in the SDF particularly as it advances into non-Kurdish areas.

The increasingly complex front lines have left hundreds of thousands of civilians trapped by fighting or living under siege.

Damascus said on Friday that it was ready to allow desperately needed relief convoys into 12 besieged areas but the United Nations said it was preparing to seek the government's permission to organize air drops.

Without the Syrian Army, all of Syria would be ISIS country by now.

"Arab and Kurdish fighters backed by" Lol, that should be "YPG with a few token Arabs following their trail".