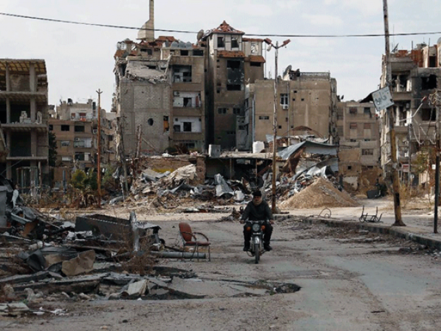 An AFP correspondent in the rebel-held east of the city said the air strikes lasted throughout the night into the morning.

Aleppo, which was Syria's commercial and manufacturing hub before civil war broke out in 2011, has been a key battleground ever since rebels seized eastern neighbourhoods of the city the following year.

A two-day truce brokered by Moscow and Washington earlier this month in a bid to rescue a wider ceasefire expired without renewal and Russia warned it would press ahead with it air campaign, saying the rebels had failed to deliver on promises to break ranks with Al-Qaeda loyalists.

The Russian strikes focused on the Castello Road, the only remaining route out of the rebel-held east of the city, the Syrian Observatory for Human Rights said.

A child was among two people killed in strikes on the rebel-held Al-Maysar neighbourhood, the White Helmets civil defence group said.

"In the past two days, my kids and I haven't been able to sleep all night because of the huge blasts, the likes of which we haven't heard before," said 38-year-old shopkeeper Abu Ahmed.

"We haven't been able to get any products or produce for the shop over the past two days because no one can use the (Castello) road," he said.

The renewed government offensive around Aleppo comes a day after another key ally, Lebanese militant group Hezbollah, pledged to send more fighters to join the "greatest battle" of the war.