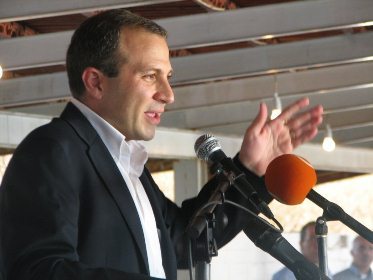 Free Patriotic Movement chief Jebran Bassil announced Sunday that the FPM will seek to bar Syrian refugees from setting up encampments and opening shops in towns that witnessed FPM victories in the latest municipal elections.

“The presence of Syrian gatherings and encampments will be prohibited in our towns,” said Bassil at an FPM municipal conference.

More than 1,000 unofficial refugee encampments are scattered across Lebanon, mostly in the Bekaa and the North.

Several FPM and Kataeb Party ministers have warned that the huge number of refugees in Lebanon has started to pose major security, economic and demographic risks. They have also warned of alleged international efforts to naturalize or permanently settle the Syrian refugees in Lebanon.

Five years into the Syria conflict, Lebanon hosts more than one million refugees from the war-torn country, according to the United Nations. At least two thirds of them live in extreme poverty, the U.N. says.

“The presence of Syrian gatherings and encampments will be prohibited in our towns,” said Bassil at an FPM municipal conference.

in "our" towns? Another bandit outlaw wanna be.

It was the fpm hezbollah government that opened the borders for the syrians in the first place.

People in the public eye should meet minimum height requirements of at least 140 cm in order to be seen. I call for a constitutional amendment at the earliest possible moment.

Liar!!! One million times liar....just to keep the people away from talking about your corruption...you "little hitler"!

I needed a good laugh today, thanks ImBassil.

no words can describe this despicable creature.

scum of the earth