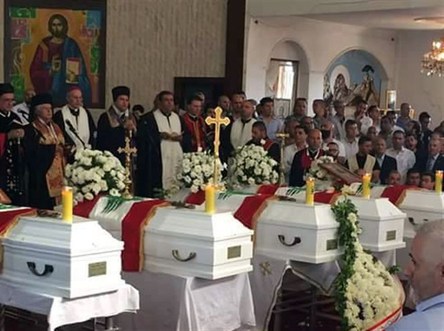 The restive eastern border town of al-Qaa bid farewell Wednesday to five of its sons who were killed before dawn Monday in unprecedented multiple suicide bombings, as the region's Christian spiritual leader called for turning the neighboring area of Masharii al-Qaa into a “military zone.”

Faysal Aad, Joseph Lebbos, Majed Wehbe, Boulos al-Ahmar and George Fares were laid to rest at the town's cemetery after a highly emotional funeral that was held amid strict security measures.

The funeral had been postponed to Wednesday over security fears, after the town was hit by two waves of attacks on Monday. Four suicide bombers targeted the town in the pre-dawn attack, killing five people and wounding 15 others, as another four bombers attacked the town in the evening and wounded 13 people.

“The town of al-Qaa is Lebanon's rock and on this rock the terrorists were crushed and they entered the gateways of hell while the gateways of heaven were opened for our martyrs,” Greek Catholic Archbishop of Baalbek Elias Rahal said at the funeral.

“We will remain in this land and we will not budge, even if we offer 100 martyrs everyday,” a defiant Rahal added.

“We will not be intimidated by the takfiris or their bombings,” he vowed.

Rahal also called on the government to “organize those who are around us,” in reference to the displaced Syrians who live in unofficial encampments outside the town.

“There are 20,000 refugees who go wherever they want freely,” the archbishop warned, stressing the need for “blocking the gaps” through which the attackers might have infiltrated the town.

“The Masharii al-Qaa area must be fully turned into a military zone to prevent another tragedy,” Rahal added.

On Tuesday, Interior Minister Nouhad al-Mashnouq said the refugee encampments had “nothing to do” with the bombers, saying the attackers came from “their emirate in Syria,” as Army Commander General Jean Qahwaji said they included “a woman and three Syrians.”

Meanwhile, the Vatican's ambassador to Lebanon Gabriele Caccia, who attended the funeral, warned that "we must never be dragged into violence."

Lebanon hosts more than 1.1 million Syrians, a huge burden for the country of four million people. Several Lebanese politicians have warned about the inability of the country to bear this burden and had already called for the closure of borders after security incidents.

Al-Qaa is one of several border posts separating Lebanon and war-torn Syria and is predominantly Christian although one district, Masharii al-Qaa, is mainly Sunni Muslim and home to a large number of Syrian refugees.

Suicide blasts in the area have typically targeted checkpoints or military installations and rarely include more than one attacker.

In August 2014, the army clashed with the Islamic State group and al-Nusra Front, al-Qaida's affiliate in Syria, in the nearby border town of Arsal.

Where was this glorious "resistance" who claims they defend Lebanon. I guess as usual Christians are less valuable to them, just pawns for theirs (and ISIS') amusement. See what happens when people sell out? RIP civilians, I'm sorry you have to deal with trash and lies from both sides of this pathetic conflict.

One problem bighassan: I don't support them either. All you did was create more lies and whine about M14. You're one sad propagandist, and I bet you smiled when Christians were killed too.

Neither of you care for Christians, enough with the lies...