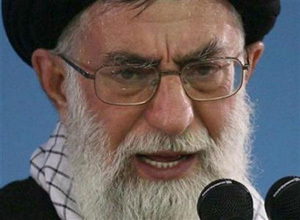 Iran will not intervene in Bahrain despite a growing risk of internal conflict caused by the kingdom's treatment of its Shiite majority population, supreme leader Ayatollah Ali Khamenei said Wednesday.

"The Islamic Republic of Iran will not intervene in any way in the affairs of Bahrain," Khamenei told a gathering of top officials to mark the end of the holy month of Ramadan, in remarks carried on his official website.

"But if political wisdom exists in this country (Bahrain), they should not allow the political conflict to transform into a civil war," he added.

But Iran has strongly criticized the repressive actions of the Sunni monarchy in Bahrain, which rules over a 70-percent Shiite population.

There was particular concern over Bahrain's decision to strip the country's leading Shiite cleric, Ayatollah Isa Qassim, of his nationality last month.

"Surely they know that the aggression against Ayatollah Sheikh Isa Qassim is a red line... that will leave no option for the people but to resort to armed resistance," Qassem Suleimani, head of the elite Revolutionary Guards' overseas operations arm, the Quds Force, told state media at the time.

There has been mounting international criticism of Bahrain, which stepped up moves to dissolve the main Shiite opposition bloc last month.

Even the United States, a close ally that has its Fifth Fleet stationed in Bahrain, condemned the action against Qassim, saying it was "deeply troubled by the government of Bahrain's practice of withdrawing the nationality of its citizens arbitrarily."

how does your ayatollah treat its citizens?

He's not my Ayatollah and yes Iran has its own human rights issues. I don't care for the Irani leadership any more than the Bahraini.

Yet you Rich gulf arabs gets millions of Indians and Pakistanis etc. to come work in your country for lousy sums of money.

No better in your Iran, soooooo? PS they've been interfering everywhere, so this is nothing but giant lies as usual.

Imposing over a government, which is the Iranian tactic anyways in Lebanon as well, so yes.