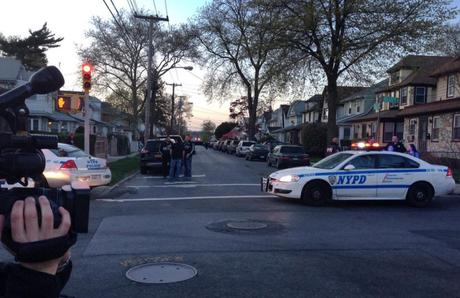 Authorities in Louisiana -- already rocked by the deadly police shooting of an African American man -- said Tuesday they have arrested three black youths for stealing guns they planned to use to kill officers.

Police responded around 2:00 am (0700 GMT) on Saturday as the suspects were trying to steal weapons from a pawn shop, and surveillance video showed the trio breaking in through the roof, according to the Baton Rouge Police Department.

Antonio Thomas, 17, "stated that he and three other suspects stole the firearms and were going to get bullets to shoot police," a police statement said.

He was booked into prison on charges of simple burglary and theft of a firearm. It was not immediately clear whether the fourth suspect not in prison was on the run.

Eight weapons were stolen. Authorities have recovered six of them and are working to find the other two.

The other two robbery suspects -- Malik Bridgewater, 20, and an unidentified 13-year-old male -- were charged with burglary and theft of a firearm.

Police also arrested Trashone Coats, 23, who police said allegedly purchased two handguns illegally on the street. He was charged with illegal possession of a stolen firearm.

The suspects were arrested at various times during the investigation, though Thomas was arrested on the scene.

Police said they worked in collaboration with the Louisiana State Police, East Baton Rouge Sheriff's Office and the US Bureau of Alcohol, Tobacco, Firearms and Explosives (ATF).

Thousands of people have demonstrated across the United States against the latest fatal police shootings of two African American men, whose dying moments were captured in shocking video footage that went viral online.

One of those killed was Alton Sterling, shot dead at point-blank range by a police officer in Baton Rouge.

Most of the protests were peaceful, though a riot broke out over the weekend in Saint Paul, Minnesota -- where the second of last week's fatal shootings took place -- resulting in more than 100 arrests.