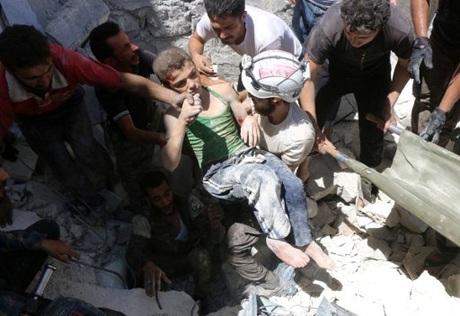 The U.N.'s Syria envoy voiced hope Tuesday that peace talks could restart next month, as U.S. Secretary of State John Kerry said there had been "progress" in efforts to salvage an urgently-needed ceasefire.

U.N. envoy Staffan de Mistura has struggled to keep the peace process alive amid a surge in fighting between Syrian President Bashar Assad and rebel groups.

The fighting persisted Tuesday, with government forces seizing a rebel-held neighborhood on the northwest outskirts of Aleppo, tightening their siege of the opposition-controlled parts of the city.

The government also carried out renewed barrel bomb attacks on opposition-held districts, a day after bombardments that killed at least 24 people, a monitor said.

"Our aim is to proceed with a third round of intra-Syrian talks towards the end of August," de Mistura told reporters after the meeting.

While de Mistura has said he would prefer to negotiate with a real ceasefire in place, he conceded that may not be realistic.

"The talks are not going to wait for improvement in Aleppo or in Damascus," he said.

The Geneva meeting came hours after higher-level negotiations on the sidelines of an Asia summit in Laos.

Russia and the United States support opposing sides in Syria's civil war, which has left 280,000 people dead and forced half the population to flee their homes.

They agreed "concrete steps" to revive the ceasefire and tackle jihadist groups in Syria, although details have not been made public.

Kerry said Tuesday bilateral work was inching forward and that an updated diplomatic plan for Syria could be unveiled "somewhere in early August."

"What we're trying to do is strengthen the cessation of hostilities, provide a framework which allows us to actually get to the table and have a real negotiation," he said.

The U.N.-brokered talks have so far been deadlocked over Assad's fate.

The government has ruled out negotiations on Assad's possible departure, while the main opposition High Negotiations Committee has said it will not agree to any deal that leaves Assad in power.

The Britain-based Syrian Observatory for Human Rights said loyalist troops had full control of Aleppo's Leramun district after heavy clashes, and reported fighting for neighboring Bani Zeid, which is also held by rebels.

The two areas have been used by rebels to launch rockets into government-held districts in the west of the city.

In recent weeks, regime advances around the city's outskirts have severed the only remaining route into the rebel-held eastern neighborhoods, effectively placing them under siege.

Opposition forces have responded by firing barrages of missiles into government districts, killing scores of civilians.

Government forces effectively severed the opposition's Castello Road supply route on July 7, when they advanced to within firing range.

They have tightened the encirclement of the rebel-held east since then, taking parts of the road itself and prompting food shortages and spiraling prices in opposition neighborhoods.