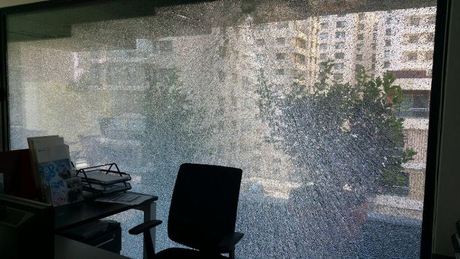 The agency said that the shooting inflicted material damages on the building where the office is located.

Investigations into the incident were opened, NNA added without giving further details.

Later during the day, former Justice Minister Ashraf Rifi issued a statement denouncing the attack, he said: “We denounce the shooting attack against the office of al-Jadeed owner,” and urged “judicial action on the incident to track down the perpetrators and bring them to justice.”

A war or words erupted lately between al-Jadeed and a TV station owned by Speaker Nabih Berri.

Al-Jadeed accused Berri of striking what it described as a “suspicious” deal with the Kuwaiti al-Kharafi group where Berri is involved in “corrupt” acts.

they are not unknown.... in Beir Hassan neighborhood.

He also said he owns several companies and trades actively on the New York Stock Exchange and jets around the world in a learjet.

It was Berri's men who carried out the attack.